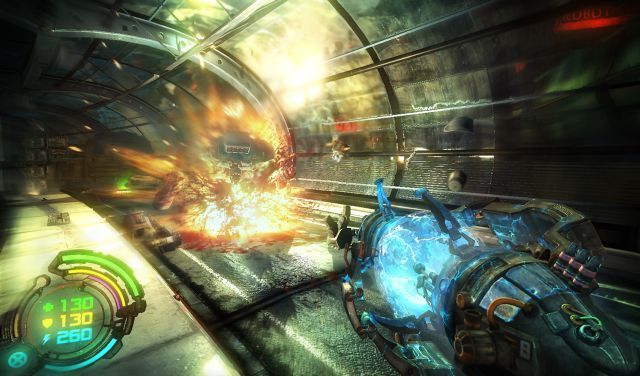 A newly announced PC first person shooter, Hard Reset, is due to be released sometime in September. PC Gamer's web site reveals the first details and a teaser trailer for the game which comes from a newly revealed Poland based game developer, Flying Hog Wild. The developer is composed of veterans of several major game studios including People Can Fly (Painkiller and Bulletstorrm) CD Projekt Red (The Witcher RPG series) and City Interactive (Sniper: Ghost Warrior).

The single player only game is described in the article as a mix of "Blade Runner, The Matrix, and Painkiller." The game takes place in the future where your player character Major Fletcher has to deal with lots and lots of robots who have pretty much taken over nearly all of the world except for one remaining human city. The game's graphics engine, Road Hog, was developed in-house by Flying Hog Wild which is a bit of a switch considered that many, if not most, small game developers choose to license a game engine such as Unreal Engine 3 or CryEngine.

With the game's release about two months away it's likely that we will learn lots more about Hard Reset in the very near future. Pricing for the game has yet to be announced although PC Gamer says it will likely be somewhere in between a big budget retail shooter and a smaller indie developed downloadable game. In the meantime you can check out the game's teaser site as well as the trailer below.