In March, Evernote launched a new design and a lot of new features for its Windows Phone 8 app. This week, the popular note taking software program has offered up a new UI revamp and many new features to its Windows 8 app as well. 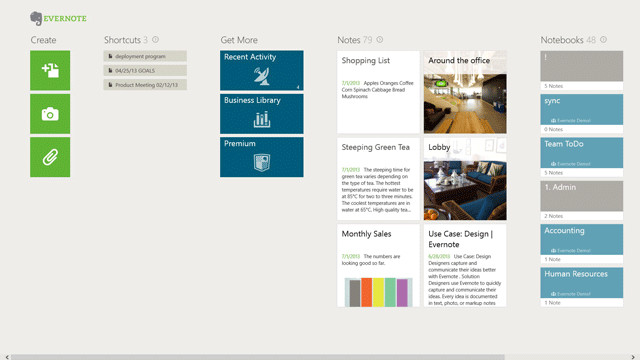 The new hub page is just one of the changes made to the app, according to a post on the Evernote blog. It is supposed to be a better experience for Windows 8 touchscreen and tablet users. Some of the new note options in the app include the creation of a new text note, a snapshot or starting with a file attachment. Any shortcuts that are created in other Evernote apps on your account will now appear on the Windows 8 app. It also now allows users to see any recent updates to shared and Business notebooks.

You’ll be able to jump into your company’s Business Library from the Get More section of the hub page. You will also see Business Notebooks appear in blue in the Notebooks column to distinguish them from your personal notebooks.

The security obsessed users will be happy to know that the Windows 8 Evernote app now supports two-step verification among its many additions, along with some unnamed bug fixes and "stability and reliability improvements." Evernote claims that it has even more feature updates in the works for the app.