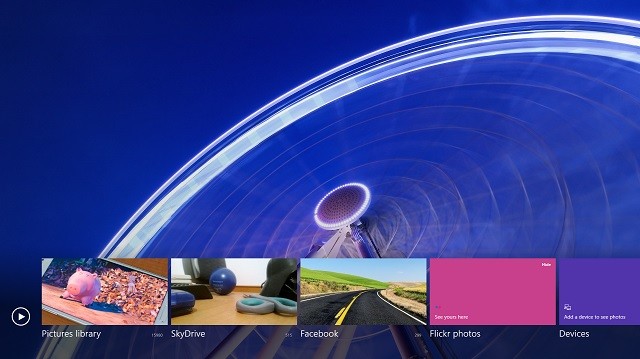 The Windows 8 photos app, seen above, has features the Windows 8.1 app doesn't have

Microsoft has killed the integration of Facebook and Flickr photos into the Photos app in Windows 8.1, claiming that apps available in the Windows Store are now good enough that the functionality is no longer needed. The functionality still remains in the Windows Phone Photos app, as the platform has been touted as having tight integration, but that may also change in the future.

Speaking on the Microsoft community forums, a spokesperson for Microsoft said:

In Windows 8, we wanted to provide a way for folks to view their photos on other services knowing there would be few (if any) apps in the store at launch that would do so.  Now there are many apps in the store that offer ways to view photos on other services and soon there will even be a Facebook app from Facebook.  We’re confident Facebook will offer great ways to view and engage socially with photos on Facebook.  We welcome Flickr to do the same.  In addition, the People app still offers the ability to socially engage with your friends and even your own photos.

At the moment neither an official Facebook app nor Flickr app are available from the Windows Store, although the former will be coming soon after Microsoft announced the app at BUILD 2013. It's interesting that Microsoft has decided to remove a feature from the Photos app that some people clearly found useful: many comments on the Microsoft community forums are annoyed at the removal, with one user calling it a "massive step backward".

Windows 8.1 is currently only a Preview version, so Microsoft may have a change of heart and reintroduce these features at sometime in the future, but for now it looks like you'll have to use the (currently unavailable) apps to get your Facebook and Flickr photos.

Source: Microsoft Community via: The Verge