For quite a while now, Facebook has been allowing users to switch to the new user interface but has always offered a way to switch back to the old layout. Facebook is now displaying a message explaining that the old interface is going away in September.

“We’ve made improvements to the new Facebook.com and we’re excited for everyone to experience the new look. Before we make the classic Facebook unavailable in September, we hope that you’ll let us know how we can continue to make Facebook better for everyone.”

The pop-up also highlights some of the key new features of the interface including its cleaner look, bigger text, quicker loading times, and a dark mode that can be optionally turned on by heading to the drop-down menu. 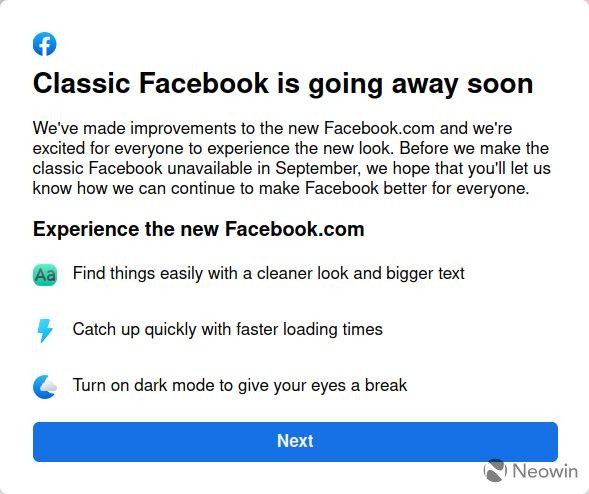 Facebook’s new interface was first unveiled at F8 2019 which was held in April and May of that year, it was subsequently made available for users to switch to in March of this year.

A word of warning, extensions like Social Fixer still do not work on the new layout but for the time being, you can switch back to the old interface, but with it being scrapped in a matter of weeks, there is little point in switching back, maybe the time can be better spent getting used to the new design.