Fairphone's first mobile device was built around the idea of sustainability and social responsibility, and its latest smartphone is no different. The Fairphone 3 has been announced today in response to the need "for a more ethical, reliable and sustainable phone."

Regarding the new handset, Eva Gouwens, CEO of Fairphone, wrote in a blog post:

"This is the phone for all of us who dare to care about what kind of a world we’re creating with our purchase decisions. For all of us who want a great phone that is kinder to people and to the earth. For all of us who believe that care for workers and our planet ought to be a natural part of doing business."

The company didn't reveal much about the phone's specs and features, however. A report from WinFuture, meanwhile, says the device is powered by a Snapdragon 632 SoC with eight cores clocked at up to 2.2GHz. The chipset is paired with 4GB of RAM and 64GB of internal storage, expandable with a microSD card slot.

It sports a 5.7-inch LCD screen with a resolution of 2160x1080 pixels and it's protected by a Gorilla Glass 5. The phone also has large bezels, bringing back memories of old phone designs at a time when display notches were non-existent. Its modular design is the main selling point, meaning you can remove and replace the battery unit, display, camera, speakers, and other hardware components. 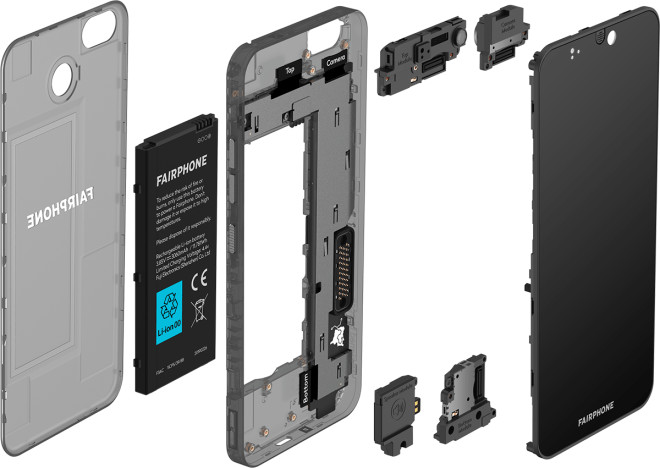 In the camera department, the device has a single 12MP camera with an f/1.8 aperture. On the front sits an 8MP camera. Connectivity-wise, it supports 4G/LTE, dual-SIM , WLAN, Bluetooth 4.2, and NFC.

It packs a modest 3000mAh battery that charges over a rather modern USB Type-C port. It also supports Qualcomm's QuickCharge 3.0 and even features an eco-friendly charging mode that loads the device in such a way that its service life is extended in some measure.

The Fairphone 3 runs Android 9.0 Pie. While its specs aren't anything to write home about by today's standards, it costs €450 (~$500). It will be available on September 3 via Fairphone's website and German retailer Mobilcom-Debitel, according to WinFuture.