As the rate of growth for Android continues to accelerate – now standing at well over 550,000 device activations every day – what is perhaps just as remarkable is the extraordinary variety of devices, form factors and price points that Android now encompasses. The cheapest handsets keep getting cheaper, while at the top end, displays are getting larger and better, 3D recording and playback is now possible, and specialised devices are regularly arriving to fill just about every niche imaginable, from mobile gaming to rugged go-anywhere needs.

But one segment of Android’s market which hasn’t been specifically targeted so far now looks set to get some attention, with the HTC Bliss, a new device aimed directly at women. Pocketnow.com has uncovered the world’s first image of the new handset, shown below in its matching desktop dock, which is believed to wirelessly charge the device, as well having built-in speakers.  As noted by This is my next, who first broke news of the Bliss back in May, the colour of the handset and cradle are “somewhere between a forest and sea green, and the color was selected for its ‘calming’ effect”. 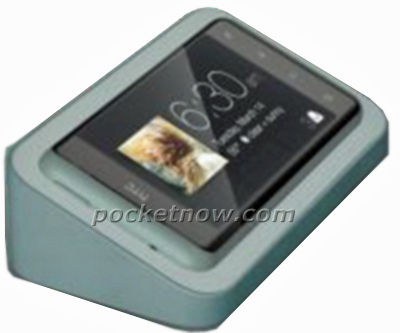 No word yet on which Android version will be on board, nor on whether Bliss will run HTC’s Sense UI, but in the image above – which shows the device in the clock/alarm mode that it automatically switches to when docked – the Sense design aesthetic is certainly evident. The dock isn’t the only accessory designed exclusively for the device. A matching Bluetooth headset will be available too, but one other device, which This is my next claims is called the “charm indicator” is much more interesting.

The charm is a cube-shaped device that is attached to the handset via a cord; when you miss a call or a message comes through, the charm lights up. This might sound bizarre, but the idea is that the illuminating charm would make it easier for ladies with big handbags to find their handsets, and the cord attached would make fishing the phone out of the bag equally simple.

HTC has reportedly carried out extensive focus group testing to identify what features women desire most in a phone, and the charm indicator is clearly the most obvious example of how this feedback has been used to create a more female-focused device. That said, the shopping comparison and calorie-counting apps that it's claimed will also be included on the handset sound a little patronising – but perhaps these are exactly what every woman wants these days.

Bliss is expected to arrive on Verizon later this year; so far, neither HTC nor Verizon have commented on the reports or the leaked photos.