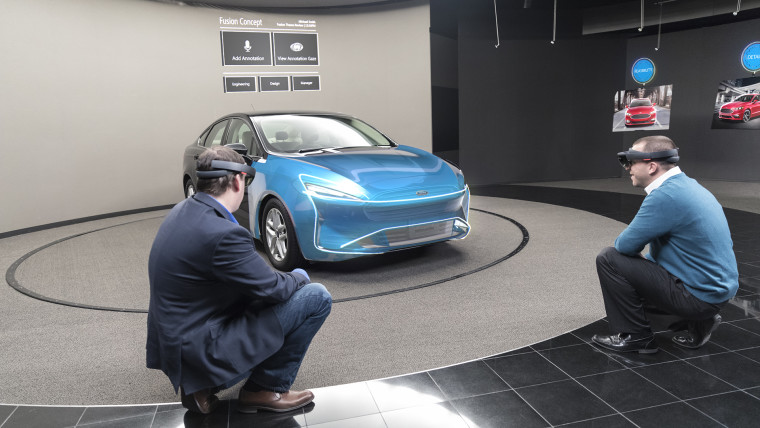 Designing, and bringing a new vehicle to market takes years, and the collaboration of several partners and teams. This can be challenging in today's world, especially with the risk of your prototypes or concepts leaking when unauthorized personnel gets their hands on the designs. We've seen it happen with the countless leaks this past year of both the iPhone X and the Galaxy Note8, nauseatingly so.

Ford and Microsoft have announced that the former will fully embrace the augmented reality HoloLens HMD in its design process, by further expanding its role in the Design Center after a successful pilot this past year. This will give its industrial designers and engineers the ability to visualize their concepts before building a physical clay model, which is a costly process, especially when changes need to be made.

Beyond that, this will allow its designers to iterate and experiment more freely, which could result in more exciting vehicle designs in the long run. In the official announcement, it was noted that this was most evident when the company was experimenting with a new grille theme:

In their early work in grille theme development, they proved that what used to take days with multiple physical models could take only hours using a HoloLens and one physical model.

The integration of the AR headset will not only give designers the freedom to experiment, but will reportedly save time as well since designs can be quickly shared across development teams throughout the world, with each seeing only what is authorized beforehand, without revealing the entire design. Elizabeth Baron, Ford virtual reality, and advanced visualization technical specialist was quoted as saying:

“Microsoft HoloLens allows a whole team of people to collaborate, share and look at ideas together. It is exciting because it helps our designers and engineers communicate effectively and ideate to see the future earlier in the process by mixing virtual and physical models. This allows great freedom and efficiency in how prototypes are created or changed.”

This isn't the first time the HoloLens was used to revolutionize specific industries and processes. Gensler, the world's largest design and architecture firms, used the device to build its new campus with the help of mixed reality, and an application designed by Trimble. Autodesk revealed that its new Fusion 360 application would give companies like Ford and others the ability to visualize concepts and designs without costly prototypes, after being inspired by the technology unveiled by Microsoft.

Although the device has not seen a revision since it has gone on sale in several markets worldwide, Microsoft did note that the next version will have an embedded AI co-processor, something its research teams have been working on. Beyond that, the company will have a Mixed Reality showcase next month, where the control wand could be unveiled, among other devices from its OEM partners, in a combined push to become a market leader in the space.