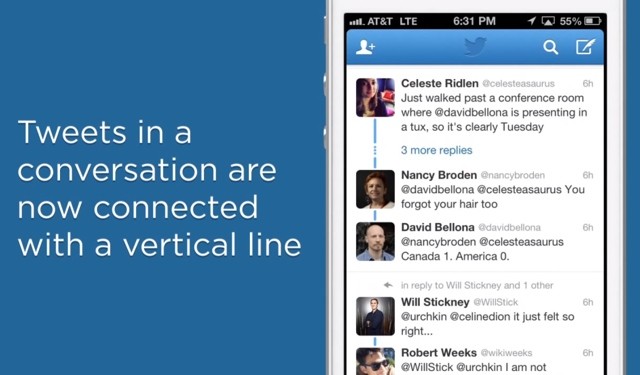 Okay, it's no secret the public has heard perhaps a bit too much of Robin Thicke lately. It's been clear for the past few months now how much he really dislikes blurred lines. While Thicke desperately searches for a better pair of glasses, there's some new lines that people are getting fed up with. Twitter's introduction of blue conversation lines has caused quite the stir.

Here's how they work. Since the launch of the new feature, any time someone on your Twitter timeline replies to another tweet, the two are linked by a blue line connecting the profile pictures to the left of each tweet. The blue line extends the longer a conversation is and then condenses if it gets a bit too long, but you can always click to expand the full conversation yourself. Perhaps what's most annoying is that each time someone replies in a conversation, the entire conversation is brought to the top of the timeline.

Since its very birth, tweets have always displayed in reverse chronological order. It was simple and easy to understand. Right before the blue lines feature debuted, one could click any tweet with a reply in it to expand more of the conversation. Now, it's almost as if all conversations are expanded by default. The blue lines are somewhat distracting and seeing unwanted conversations is annoying. Simply put, the people are not happy. A quick search of "blue lines" on Twitter will prove it.

Hopefully, Twitter will hear the voices of its users and reverse the blue lines or at least provide an alternative. It wouldn't be the first time the microblogging service launched a new feature with heavy criticism, only to kill it shortly after. Remember the #Dickbar?