The Windows Phone Store has been busy already this week, with the first edition of the Hulu Plus app and a new and revamped version of the official YouTube app, and now a well-known app has received a major refresh as the Foursquae app was overhauled. 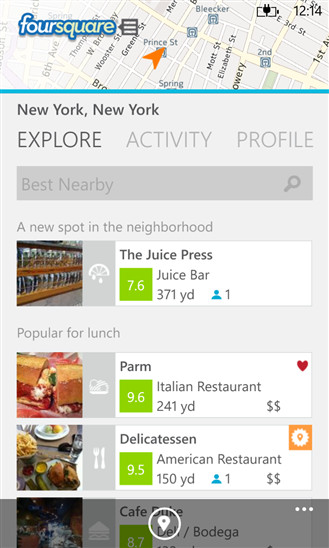 The news comes via the official Windows Phone blog, which announced the new 3.0 version of Foursquare is now available for download through the Windows Phone Store. The upgraded Foursquare app is supposed to have a number of new features for users of the location-based social network, such as the ability to pin any people or locations found on the app on the home screen.

The new version also adds notification support to the Windows Phone lock screen, and users can now access the app via voice search to look up people or places, or to check in a location. There's also a new way to use a Windows Phone's NFC hardware to check in a place and notify other Foursquare users.

Perhaps the biggest change in the new Foursquare app is its new user interface. As seen in the above screenshot, the Foursquare Windows Phone app has now fully embraced the Modern UI that is a part of the operating system. While the app is available for all Windows Phone 8 products, the official Foursquare blog points out that the app has also been optimized for Nokia's Lumia phones, stating:

Some of the Lumia models even integrate Foursquare data into their augmented reality experience (!!!), so it feels like you’re in the future when you’re finding cool places and money-saving deals.

Though it's no release date was provided, a new version of the Foursquare app for Windows Phone 7 devices is in the works.