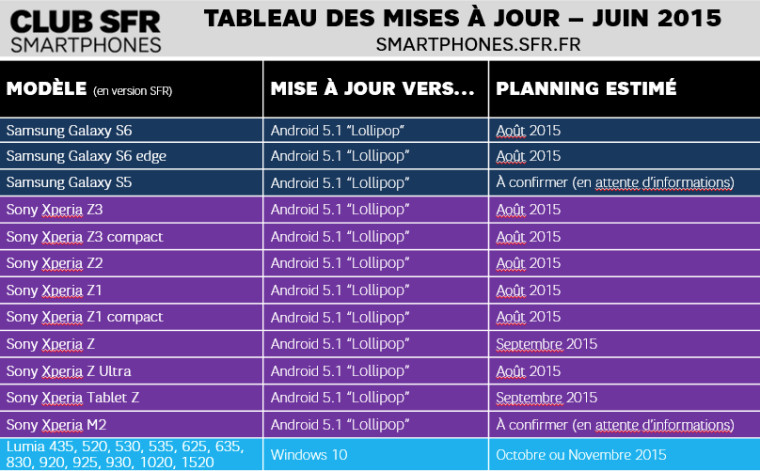 In July, Microsoft will be releasing Windows 10 for desktop, laptops and large tablets but as the company noted in the spring, Windows 10 Mobile will arrive later in the year. We had previously scooped that Windows 10 Mobile would be headed to OEMs in late September and now we have a French carrier saying that they will update their mobile devices to Windows 10 Mobile in October or November.

According to SFR, a large French telecommunications company, in October or November they will be updating the Lumia 435, 520, 530, 625, 635, 830, 920, 925, 930, 1020, and 1520 to Windows 10 Mobile. While the company will not say exactly which month the upgrade will occur, seeing as it looks like Microsoft is going to deliver the final OS to OEMs in September, the carrier is looking to quickly turn around the OS and provide it to its users.

The date discrepancy could be the result of several unknowns. First, if Microsoft provides the bits to upgrade the phones on the last day of September, the company will need some time to prepare their own systems to deliver the update. Also, because there are so many Lumia devices to update, they may stage the rollout, which could span a couple months.

The company says that they will update their roadmap again in September with more information about Windows 10 Mobile, which means these plans are the target, but could shift too. If nothing else, this bit of information provides further confirmation that Windows 10 Mobile will arrive this fall.

Source: SFR Thanks for the tip @notcassim!