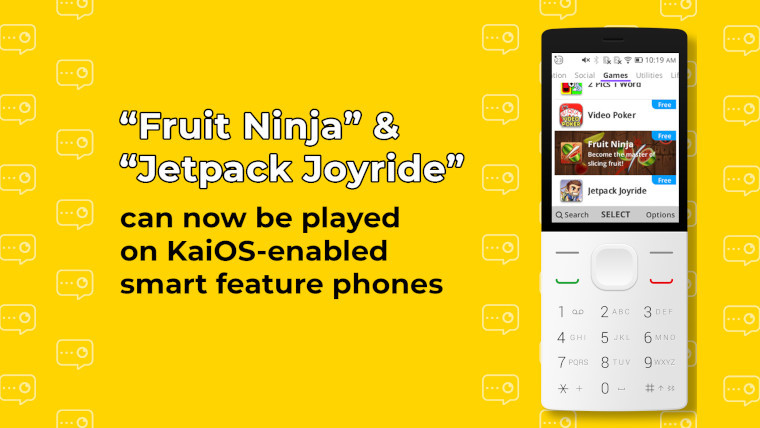 KaiOS Technologies has announced that the Singapore-based start-up, Storms, has ported the popular Fruit Ninja and Jetpack Joyride games over to KaiOS, the operating system designed for smart feature phones. Storms is not the original developer of these games but owns the exclusive rights to convert these games into instant games that are able to run on KaiOS.

KaiOS is currently powering 150 million smart feature phones around the world and these two games will be available to the owners of those devices. KaiOS runs on smart feature phones – those which have a feature phone form factor but come with features typically found on smartphones such as Google Assistant. The form factor and limited hardware inside allows them to be purchased at a lower price than typical smartphones making it easier for underserved communities to get online.

Commenting on the launch of the two games, Sebastien Codeville, CEO of KaiOS Technologies, said:

“Storms and KaiOS share the same mission, which is to empower all people – especially the underserved markets – with quality content. We have seen how Storms’ gaming content is being appreciated by KaiOS phone users. Over the last eight months, Storms’ games have been downloaded more than one million times via the KaiStore, with markets such as Pakistan, Nigeria and Tanzania experiencing the highest number of installs.

Seeing how arcade games such as Shoot and Fish are topping the list when it comes to game installs, we are thrilled to welcome the well-loved Fruit Ninja and Jetpack Joyride which fall under the same game category to our KaiOS ecosystem.”

Both Fruit Ninja and Jetpack Joyride are available in the KaiStore and can be downloaded right now.