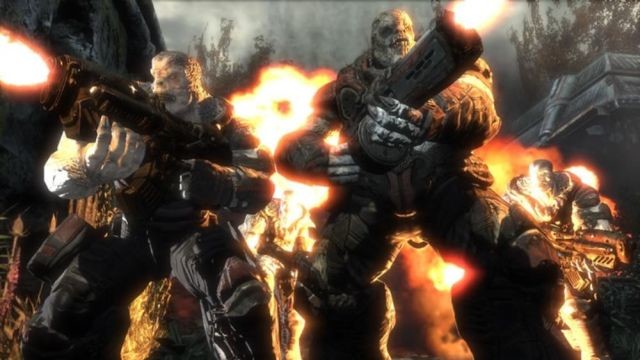 Microsoft's Games for Gold program, which offers free games to Xbox Live Gold subscribers, will offer "Gears of War" during the first half of December, the second major Xbox 360 exclusive game to be offered as part of the program, following "Halo 3" in October.

"Gears of War" will be free for Gold subscribers from Dec. 1-15, according to the Major Nelson. The game, which is usually priced at $19.99, was released in 2006 by Microsoft and developer Epic Games. The third-person shooter was an instant hit thanks to its cover-based gameplay, dark and gritty art style and impressive graphics, not to mention a rifle that had a chainsaw attached. The game spawned three sequels from Microsoft and Epic, all for the Xbox 360.

From Dec. 16-31, the free game will be "Shoot Many Robots." Released in 2012 by developer Demiurge and publisher Ubisoft, this game is normally priced at $9.99. It's a side-scrolling action game where users shoot lots of robots with hundreds of weapons that can be unlocked during the game. It also has offline co-op for up to two players and online co-op for up to four players.

Recently, Microsoft confirmed that owners of the Xbox One who sign up for Xbox Live Gold will be able to download free games every month sometime in 2014.