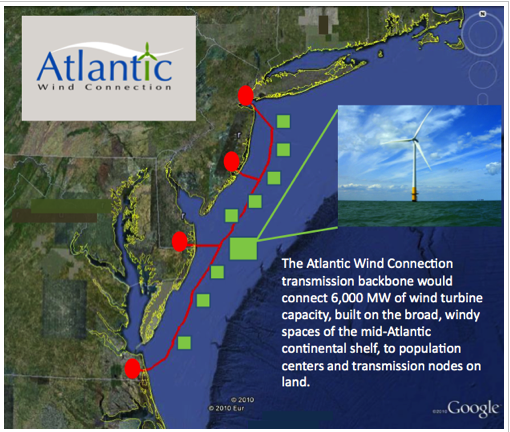 On Monday, Google announced on their official blog that they are investing into a transmission backbone that could potentially power 1.9 million households.

Google will partner with a New York financial firm to invest an estimated $5 billion into the project. The Atlantic Wind Connection (AWC) backbone will stretch from New Jersey to Virginia – a whole 350 miles and connect 6,000MW of offshore wind turbines, equating to 60% of the wind energy installed throughout the whole of the US last year.

The AWC backbone is to be situated in the Mid-Atlantic which could potentially create 60,000 MW of power because of the shallow waters. The shallow water extend miles out to sea which Google say “make it easier to install turbines 10-15 miles offshore, meaning wind projects can take advantage of stronger winds and are virtually out-of-sight from land.”

For those wondering why they chose offshore wind in the Mid-Atlantic, they later said “Many coastal areas in the United States have large population centers on an overstretched grid but limited access to a high-quality land-based wind resource. These coastal states can take advantage of their most promising renewable resource by using larger wind farms with larger turbines that can take advantage of stronger and steadier winds offshore.”

Google is investing 37.5% of the equity in the initial development stage in order to gain the needed approval to start construction. The construction is thought to start in 2013 and be finished by 2021.

In May, Google announced that they had invested $38.8 million into two American wind farms which are able to churn out 169.5 MW of power - enough to power 55,000 homes. The company have also stated that they are aiming to be a carbon neutral corporation.