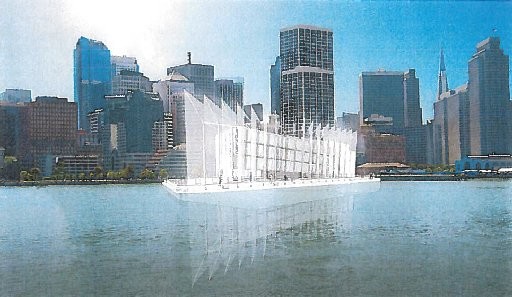 Google issued a vague statement about what they have planned for their mysterious barge in the San Francisco Bay earlier this week, saying it will be used "as an interactive space where people can learn about new technology." However, the barge itself is pretty ugly at this point in construction. Now some new artwork has come to light that shows the barge reveal sporting some huge fin-like sails.

The San Francisco Chronicle got access to the artwork via a Freedom of Information Act request to the Port of San Francisco. The port received a proposal for the barge in September from a company called By and Large LLC, which the article says is "firmly connected" to Google in some way. Indeed, the name of the company seems on the surface to be a play on the word "barge" (or maybe the company is just a big fan of "WALL-E").

The sails are supposed to "provide shade and shelter to guests" on the barge, according to the proposal. It added, "We believe this curious and visually stunning structure will be a welcome addition to the waterfront, an experience unlike any other."

The proposal claims that the barge will serve as an "studio” and “temporary technology exhibit space" but that's about all the details it offers on how this thing is supposed to be used. It's been designed to be moved from port to port in the San Francisco Bay once it is completed, stopping at each place for a month. After that, the barge is supposed to move down the West Coast of the U.S. to other locations.

And when will this weird side project from Google open? That's a good question as the company still doesn't have a permit to dock such a structure from the Bay Conservation and Development Commission.

Source: San Francisco Chronicle | Image via By and Large