Today, Microsoft announced what's coming in the Fall Creators Update for the Xbox One family of consoles, and the first preview is rolling out to Insiders in the Preview Alpha ring today.

The first main feature is a more customizable Home screen, and Microsoft says that the new look is part of its new Fluent Design System. You'll be able to add friends, games, and apps to the Home screen by selecting it, hitting the menu button, and choosing "Add to Home". This creates a 'block of content' that will "evolve over time based on the things you like to do". The company says that it will be adding more kinds of content blocks over the coming months. 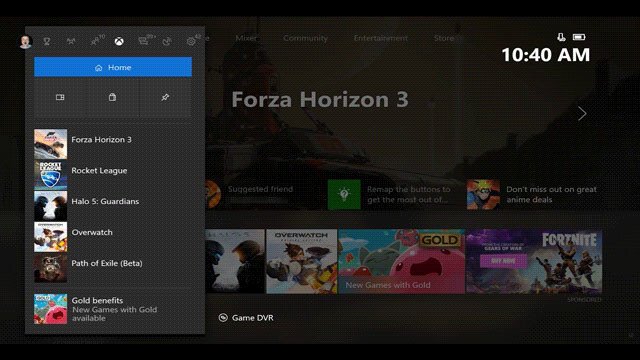 It should also be faster. According to the firm, it has merged Home, Social, and My Games and Apps into "one dashboard experience", so there are no more splash screens.

Guide navigation is being changed as well, with Microsoft saying that it's "faster than ever to switch between tabs in the guide so you can join friends, broadcast, switch between apps, and get back Home." You'll be able to use the left thumbstick, d-pad, or bumpers to quickly go to different tabs, and in the new Guide, there are individual tabs for Sign-in, Achievements, multiplayer, People, Home and recent, messages, broadcasts and captures, and a new action center.

Finally, the Fall Creators Update for the Xbox One promises a 'more immersive community'. When looking at items in your feed, there's a new full-screen view, and you can expand comments to fill the display as well. The company says that its "also making Improvements to Club discovery, to quickly display which Clubs you’re already a part of, and easily discover new Clubs to join."

Microsoft is also bringing more gaming improvements to PC users; more specifically, to the Game Bar. There will now be a switch in the feature that allows you to enable or disable it "on a per-game basis". You'll also have more choices on which audio gets broadcasted through Mixer, between game-only or system-wide audio. There's also an Xbox Live Network Troubleshooting option that's coming to Settings.

The Fall Creators Update is coming to the Xbox One family of consoles, you guessed it, this fall. Xbox Insiders on the Alpha ring will be able to download the first preview at 6pm PT today.