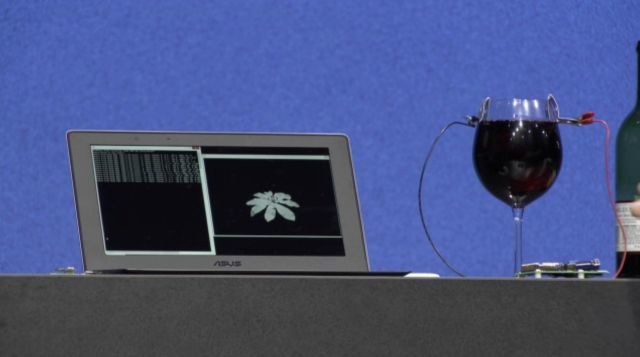 Many of us have had fun with hooking up a clock to a potato so that the chemical reactions inside can act as a battery, powering the clock. Well, Intel came up with its own version of the potato battery experiment during a keynote speech last week at the IDF conference in San Francisco.

Part of the keynote speech, which took place on day three of the event, focused on how a glass of wine could actually power a PC accelerometer. The experiment showed a typical laptop, with the right side of the screen showing a digital flower. The left side was blank at first; that's because the accelerometer that was attached to the laptop didn't have any power.

That issue was solved when some cheap red wine (we are told that the wine cost "dollars" to buy) was poured into a glass that was connected by zinc and copper wire to the accelerometer. As the glass filled up with the wine, the computing device started to receive energy and allowed the accelerometer development board to "move" the virtual flower on screen just by moving the board around in the real world.

So what does this interesting experiment prove? Intel says it would like to develop computing products that in the future can be powered by microwatts instead of watts. A future notebook could take its energy from the ambient light inside a room or even the heat coming off a person's hand as he or she touches the PC. We are likely years away from that happening, but it's certainly an exciting prospect for the future.