Apple's iPad comprises 94.64% of all tablet web traffic, according to an analysis conducted by Chitika Insights.

The analysis was conducted by querying the vast Chitika Online Advertising Network for impressions that originated from a tablet of any kind. Chitika then sorted this data into categories of the various tablet devices. Chitika's original hypothesis was that the iPad would dominate the competition, and the research results showed this to be true.

The Samsung Galaxy Tab (in all of its flavours, apparently, since there is no distinction made regarding specific Galaxy Tab models), with a meager 1.22% market share, was the competitor that came closest to the Apple iPad, which in comparison accounted for 94.64% of all tablet-based web traffic across Chitika's advertising network. 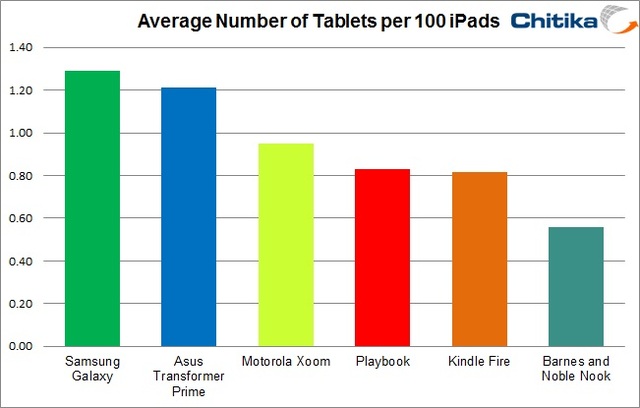 Chitika speculates that the growing middle class market in China could impact these results in the future, as the Android operating system is popular in Asian regions. However, the iPad and Apple brands are also extremely popular across the globe, so it remains to be seen how the emerging Chinese market will affect these statistics.