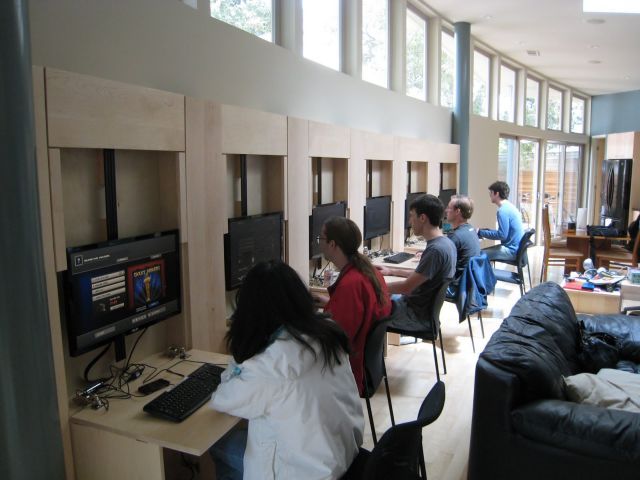 If you were a PC gamer and wanted to design your own house, wouldn't you create it to be the ultimate LAN gaming experience? Of course you would. Unfortunately most of us don't have the funds or the time to create such a house. That's not the case for Google software programmer Kenton Varda. A few days ago he posted a story on his personal blog site that showed his custom built LAN party residence in action.

The house has 12 computer stations with custom built cabinets that fold out to allow people to sit down and play on the monitors. Varda says the actual PCs are not in the two rooms but are in a back room and linked to the computer stations. When people come by the house to play games, they sign onto their Steam or Battle.net accounts and play their own games rather than Varda owning 12 copies of each game for the network. There's also a server that has a master disk which is linked to all of the 12 LAN PCs.

Varda claims that while it's not that expensive to get a house set up to become a LAN party location he does say, "The tricky part is that building a non-standard house takes lots of work. You can hire an architect and a contractor to design and build a normal house for you, but they aren't going to have a clue what to do differently to make it ideal for LAN parties." He claims he had to micro-manage the entire building of the house from start to finish, a process that took two years, to get what he wanted.

In a follow up blog post, Varda talks about the back story about why he wanted to make a LAN party house. Even though he works for Google, he had to save up a lot of his money to make his dream come true. He states:

I saved half my salary for five years and put in a massive amount of my own time and effort towards building this house, all just to host monthly parties that aren't all that much different from the one the kid down the street is holding in his parents' basement. Who does that? Was that really worth it? I think it was, not just because I can now hold LAN parties with slightly less friction than most, but because I can point at this utterly absurd, crazy thing that I did and say 'I did that, and it worked, and people think it's awesome.'