Monday morning, in the city of Abiko, 35 kilometers from Japan’s capital Tokyo, one of the biggest Japanese electronics manufacturers, NEC Corp., demonstrated a flying car hovering in air steadily at an altitude of 10 feet (3 meters) for a period of one minute (via AP).

Repeated precautionary checks were carried out ahead of the actual showcasing of the machine. After the initial checks had been completed, two brief demonstrations took place in a caged compound in an NEC facility with the workers wearing helmets for protection.

With the three-wheel system in the chasis, the vehicle looks like a tricar from the future. The rather large-sized vehicle sports four powerful propellers that keep the unmanned vehicle off the ground. 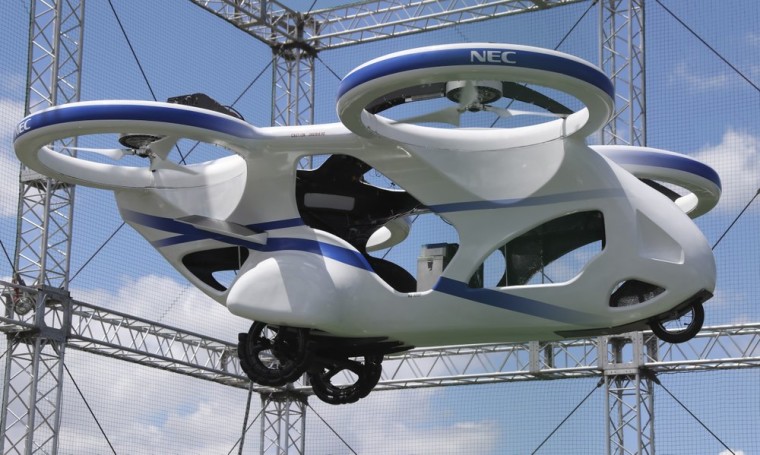 Although this flying car showcased by NEC is primarily made for delivery purposes, the general idea is that flying vehicles of this kind should be more accessible, affordable, and efficient than helicopters for transportation of people and packages. Another use-case for such flying cars is personnel extraction and evacuation in areas struck by natural disasters.

The Japanese government has championed the development of flying cars and aims to have people comfortable with using them by the 2030s. To aid development, it has built a test course in Japan for flying cars in an area that was previously affected by natural disasters. The underlying theme is to make the transition from traditional land cars to flying cars as smooth as possible.

In recent years, the focus of tech-giants like Microsoft, Uber, and Tesla has garnered considerable support for unmanned vehicles. In February 2019, Microsoft patented an aerial delivery system for unmanned aerial vehicles (UAVs). Similarly, Uber has bold ambitions with its Uber Air facility that is aimed at transportation between and within cities and suburbs, and it is set to launch as early as 2023. Likewise, Tesla is no stranger to the field of unmanned vehicles either with its acclaimed Autopilot for driver-less cars.