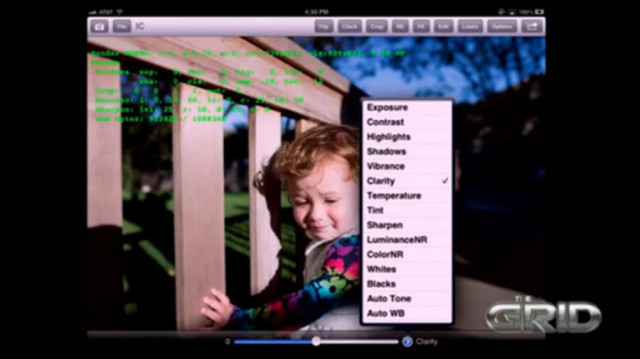 Despite massive sales in both the U.S. and worldwide markets, Apple's iPad is still marketed largely as a consumer device. With regards to more professional tasks like document editing and photo manipulation, Apple's tablet falls far short of the capabilities of Microsoft's Surface Pro, which can run full PC programs.

Today, however, this could show signs of changing, with Adobe demonstrating a version of Lightroom running on an iPad. The full version of Lightroom, now on version 4, incorporates many of the features of Photoshop in a package that also acts as a virtual library for your images.

Tom Hogarty, Adobe's group product manager, appeared on photography web show The Grid to demonstrate an early iteration of the Lightroom mobile app. Despite the fact the app appears to clearly be in the early stages of development, most features users would expect were available for demonstration.

Hogarty demonstrated the app on a second-generation iPad (non-Retina), which, while seemingly able to complete the tasks of adjusting shadows, highlights and temperature of RAW images from a Canon 5D Mark III, would likely struggle under continuous use. Hogarty himself admitted that some functions might cause the device to struggle:

Attempting some of the functions that are not optimized for the mobile version would likely make the iPad explode!

Lightroom on the iPad could make it possible for photographers to manipulate RAW files on the go. RAW is the preferred format for professionals given the fact that it conserves all possible data from the point at which the shot is taken.

At present, the only significant facility available to edit photos on Apple's tablet is Photoshop Express for iOS or iPhoto. Both applications offer a basic level of photo editing tools, but neither are able to manipulate RAW images as large as the Lightroom prototype demonstrated it was capable of handling.

Neowin has contacted Adobe to ask if a release of Lightroom for iOS is coming any time soon, and we'll update this article at the point of any development.

Source: TechRadar | Image via The Grid