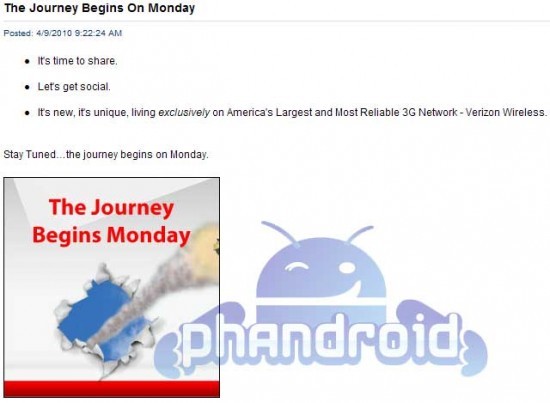 Internal documentation about an upcoming Verizon phone with strong ties to social media has been leaked.  Phandroid.com believes that the phone may be the HTC Legend because of all the leaks that have been occurring with regards to the device, but, it seems more plausible that it may be related to Microsoft’s project Pink.

While the Legend does sound like a possible outcome, it’s hard to ignore Microsoft’s special event that’s also occurring on the same day. Also, the Verizon documentation talks about how the device will be based around sharing, social media, and that it’s unique to Verizon; previous rumors had suggested that project Pink would be a phone tied closely with social media platforms.  This leak ties into previous information that Neowin reported on earlier this week.

Fortunately, the announcement will be made in approximately seventy-two hours but the exact time and location are not yet known.  Monday will be a big day from both Microsoft and Verizon, the only question remains are they announcing the same product?