Recently, Microsoft Research took us all on a high resolution voyage to Mars. Now, they are expanding on that experience. At their Research Faculty Summit on July 13, Microsoft announced their Terapixel Project. This project involved stitching together 1,791 plates from various telescopes that were located in California and Australia. You will be able to access the Terapixel project via WorldWide Telescope and Bing maps. 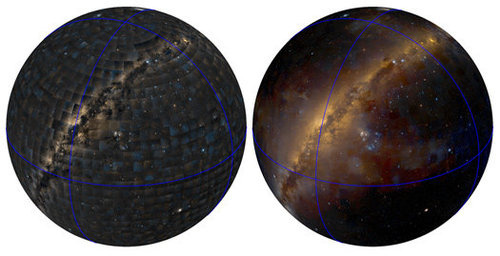 With Terapixel, you can zoom in on various portions of the night sky to see the great wonders that our universe has to offer. The project was an enormous undertaking that involved re-calculating all of the data that was collected by the Digital Sky Survey within the last 50 years. In order to accomplish this task, developers ran their parallel code across 512 processing cores on the Windows Computing cluster that they used. The result of this code and parallel processing was the ability to process all of the image data over the course of half a day, according to Microsoft Research.

According to Gizmodo, “Once the files were decompressed, they had to undergo some changes to correct the vignetting problem. Red and blue plates had to be precisely aligned to make a color image, and then everything had to be stitched together, which took about three more hours.” In order to view the full resolution image, it would require a half-million HDTVs. In printed form, the image would span over the entire length of a football field. To finalize the image, Terapixel optimized the image in order to create a seamless, vast view of the night sky. Now, it's possible to tour the universe from the comfort of your home.