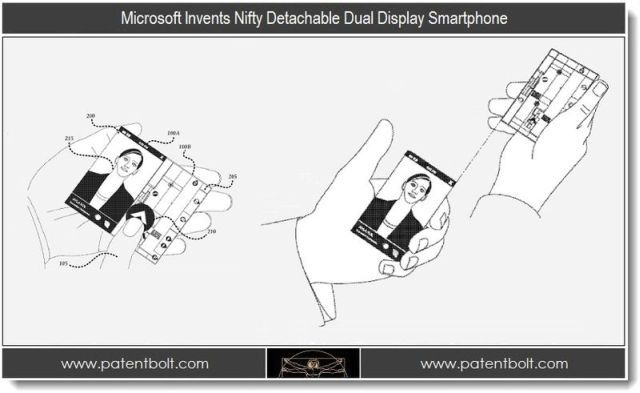 How would you like to be able to have a conversation with someone on your smartphone while also reviewing some kind of document or video at the same time? You could do that with a smartphone combined with a notebook or desktop PC, but what if you are on the road with nothing but your mobile phone?

Microsoft has apparently come up with a solution to that problem. Their proposal would allow for a smartphone design with a display screen that would basically split in two, with one that could detach from the main device. In a patent application that was discovered by Patentbolt.com, Microsoft calls this design a "dual module portable device."

The two displays could be held onto the main smartphone and each other via a magnetic strip, according to the patent. One display could separate from the main mobile phone while staying in communication distance. The end result is that while one person is talking on the smartphone, they could also review data on the detachable display.

As with all patents filed by Microsoft, it is not guaranteed that the company is currently developing such technology for a commercial release. However, we could definitely see multiple uses for such a product. It could also be used for small notebooks and even for portable gaming devices.