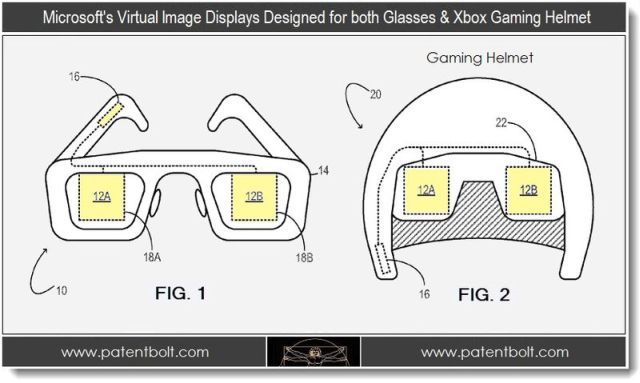 Microsoft's Kinect motion gesture technology was first developed for the Xbox 360 console. Now a newly discovered patent from the company shows that Microsoft is continuing to look into how gamers view and interact with games.

As reported by Patent Bolt, Microsoft has filed for a patent application involving the use of a pair of projectors that can be used to show images directly in front of a person's eyes. The technology could be used to make products such as goggles or even a helmet.

While the basic concept involving the projection of images directly at a person's eyes via some kind of eyewear is nothing new, Microsoft's patent also calls for the projector lenses to be partly transparent. That could mean that a gamer could keep playing a game while still being able to see the real world through the transparent lenses.

Of course, there's no word when or even if Microsoft is actively working on such technology, since patent applications sometimes don't turned into real products. However, the idea of a semi-transparent projector that would be used for gaming is certainly something that would be right up Microsoft's alley and could be presented as an option for the next Xbox game console.