Microsoft has requested the renewal of a patent filed back in 2010. According to the patent application, the company has envisioned a device that could become a multi-device with a larger screen and shared resources when combined with a similar one. As described in the new application, filed on September 26, 2016:

Besides describing how the two devices would pair, the patent also details several features that could be available for the multi-device touchscreen input. For example, as stated on the document, "a multi-screen hold and page-flip gesture can be used to select a journal page that is displayed on one screen and flip journal pages to display two additional or new journal pages, much like flipping pages in a book." This possible interaction is illustrated by the following image: 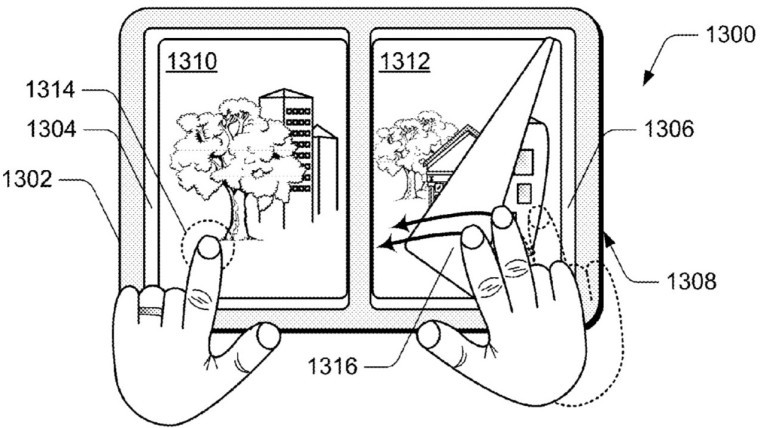 Another example of a gesture described on the patent file is as follows: "a multi-screen object-hold and page-change gesture can be used to move and/or copy a displayed object (or objects) from one display location to another, such as to incorporate a displayed object for display on a journal page." But it was not clear from the patent if the actual file would be transferred from one device to the other, or just from one screen to the other.

Finally, the patent filing claims property over the usage of this technology not only for tablets, but also for any type of multi-screen computer or device. For example, the patent could be applied for computers, mobile devices, entertainment appliances, and gaming devices.

This is not the first-time Microsoft has invested in the development of multi-screen devices, though. Back in 2009, Microsoft was developing a booklet device known as Courier, which was canceled by 2011.