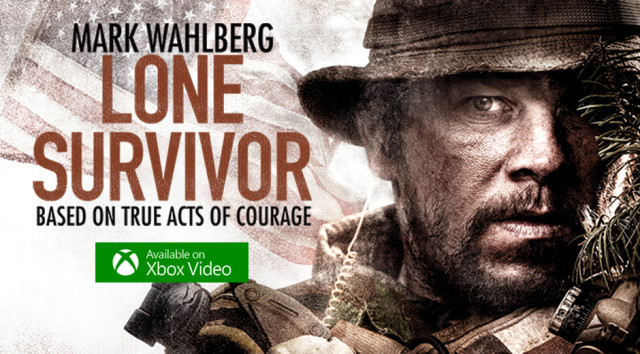 With the Memorial Day weekend coming up in the U.S., Microsoft is offering both active duty and veterans of the country's armed forces a way to get a free digital version of Lone Survivor via the Xbox Video service as a way to celebrate and thank them for their service.

The Xbox Wire website has announced that U.S. military members and veterans who go to a local Microsoft Store retail location between now and May 27th will get a code to get a digital copy of Lone Survivor, valued at $14.99. The film, which stars Mark Wahlberg, is a dramatization of a failed 2005 operation led by four U.S. Navy SEALs in Afghanistan. The film was both a critical and box office success when it was released in theaters in late 2013. It was written and directed by Peter Berg and also stars Taylor Kitsch, Ben Foster, Emile Hirsch, and Eric Bana.

In addition to the giveaway, Microsoft will give a free digital copy of Lone Survivor to a U.S. military member or veteran to anyone who purchases the film via Xbox Video between now and May 27th. Microsoft will match up to 25,000 copies of the movie that are bought by Xbox Video users.