The game is currently in pre-alpha, and will release on Xbox Game Preview, a feature similar to Steam's Early Access program which allows gamers to play unfinished games and offer feedback and advice to its developers. But despite the game's current development state, the brief footage shown during Microsoft's press conference appears highly polished - and quite horrifying.

The title opens with the player's character, Arthur Hastings, who is employee of the year at the government's "Department of Archives, Recycling and Printing" in the year 1964 in the retro-futuristic dystopian society of Wellington Wells, England. The game's plotline takes places in a post-WWII alternate reality where the British fended off a German invasion, but in the process, did a "Very Bad Thing" which left the citizens of Wellington Wells stricken with guilt, and forced to take medication called "Joy" to cope with their reality - lest society collapse.

In a concept obviously inspired by The Matrix, the populace of Wellington Wells, England are overmedicated on pills which distort reality. Throughout the gameplay footage, we see glimpses of violence and horrific acts carried out by people in uncanny masks which leave them with a permanent grin.

Arthur Hastings first appears using a machine called the "Redactor", which selectively censors news stories before publication. Before doing his job, Hastings notices the headline - "Hastings Brothers Win Scrap Collecting Prize" - suggesting that society is still having a tough time rebuilding after the German invasion of the UK.

As the player advances through office spaces in City Hall scattered with loose sheets of paper and overturned trash cans, he runs into several other masked citizens on Joy pills, before walking into a room where a festive birthday party is being held for Deirdre. They've got a piñata for the celebration, but the player has chosen not to take his Joy pills. The happy party-goers hit the piñata with sticks and bats, but in a split second, the confetti-laden decoration is revealed to be a dead rat which the party-goers are snacking on - entrails and all. 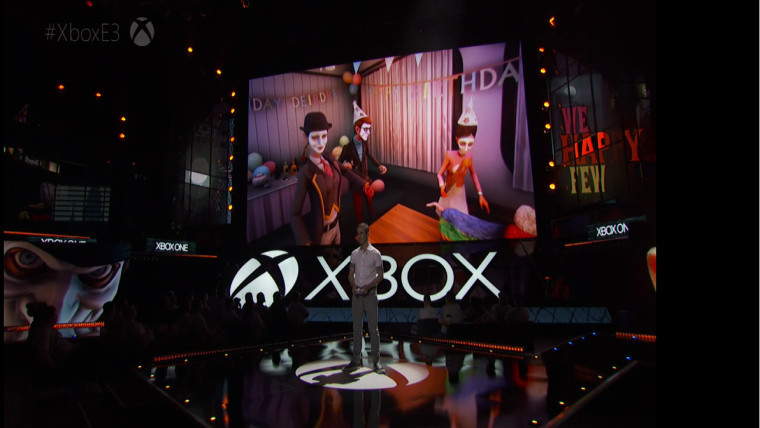 When the party-goers notice the player's horrified reaction, they realize he's broken free of the fugue state caused by Joy pills, and immediately label him a "Downer" before chasing him through hallways and offices in an attempt to capture and forcibly medicate him.

The story also takes overtures from Orwell's dystopian novel 1984, with propaganda posters scattered around the building urging citizens that it's "Never Too Late to Have a Happy Past," and reminding them that "Happy is the Country That Has No History".

We Happy Few is developed by Compulsion Games, an indie developer founded in 2009 with only one title to date: the puzzle-based platformer Contrast.

The game is currently in a pre-alpha state, but Microsoft is releasing the title on Xbox Game Preview on July 26th, allowing users to play the game in its present state and offer feedback for improvement to the developers. It's currently unknown how much of the game has been developed, or how expansive the first-person survival storyline is thus far - but the few glimpses we've seen look very promising.

The official gameplay trailer is up, which you can view right here.