Microsoft quietly released its first beta version of the Bing Desktop program just over a year ago, which allowed users to use Bing to search for Internet items without having to surf first to the Bing.com website. It also automatically downloaded the daily image on the Bing.com home page so it could become your desktop wallpaper. 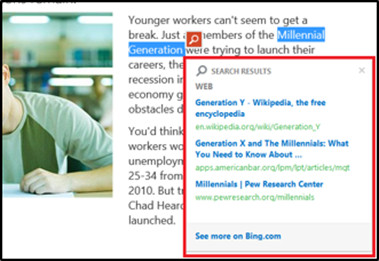 Today, Microsoft announced that over 10 million people have downloaded Bing Desktop so far. It also revealed that a new version is available to download which adds many new features. One of them allows users to highlight a word or phrase on a website, PDF file or document. The Bing icon then comes up which, when clicked, starts a search for that word or phrase. This feature works with Word 2007, 2010 and 2013, Outlook 2013, Notepad, Wordpad, Adobe Reader 11, Internet Explorer 6, 7, 8, 9 , and 10, and the latest version of Firefox, Chrome, and 360 browsers.

Bing Desktop also adds a way to view weather information based on your location, along with a new cascading layout for viewing story summaries and photos in the News sections of the app. Microsoft said, "We’ve also added a visual collection of the top trending items on the Web so you can keep your finger on what’s happening in a gorgeous waterfall layout." Finally, Facebook users can set up the app so they can see when new notifications are available in their Facebook account.