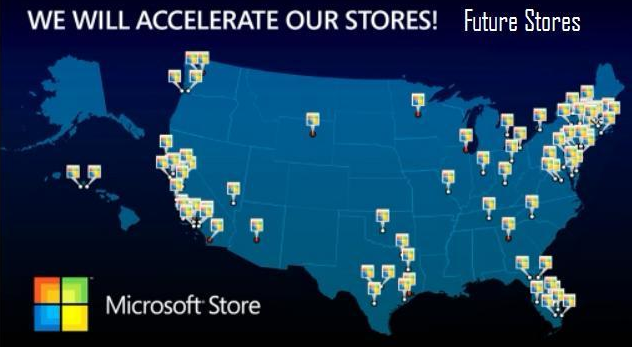 In July 2011, Microsoft announced plans to open as many as 75 new Microsoft Store retail locations in the next two to three years, including some outside of the United States. At the time, the company only had 10 of those retail stores open in the US. The math tells us that to launch 75 more stores in three years, Microsoft would have to open 25 stores a year, or about two every month.

However, since July 2011 Microsoft has only opened six more retail stores, all in the US, and has only announced plans to launch five more stores, including the most recent announcement of a Boston store. Unconfirmed reports seem to show that at least six more Microsoft Stores could be opening in the near future.

Even with those numbers figured into the mix, that means Microsoft might only open, at the most, just 16 new stores since that July 2011 announcement. If Microsoft keeps at that current pace, it also means it will fall far short of its goal of opening 75 new stores by mid-2014.

We contacted Microsoft to ask if their target number of 75 new Microsoft Store locations has changed since that announcement. We received a response back from a Microsoft spokesperson:

At the Worldwide Partner Conference last summer, Kevin Turner discussed potential plans to open up to 75 new Microsoft Stores within the next 2-3 years. As Kevin noted, we continue to learn from our customers so we can provide them with the best choice, value and service and we will adjust and adapt our strategy to open stores in a number of additional locations over the coming years as it makes sense. While we're exploring several locations for future Microsoft Stores, we have no additional information to share at this time.

While not a 100 percent confirmation, this answer would strongly hint that Microsoft is indeed making changes to its plans to open new Microsoft Store locations. We will keep track of the company's plans in the months ahead.