Microsoft today announced a new partnership with NASA to bring images & data of the moon and Mars to Microsoft's Worldwide Telescope (WWT) for Internet viewing. Through a Space Act agreement, Microsoft and NASA will jointly develop the technology and infrastructure necessary to make NASA content available including high-resolution scientific images and data from Mars and the moon for viewing through WorldWide Telescope, Microsoft's online virtual telescope. 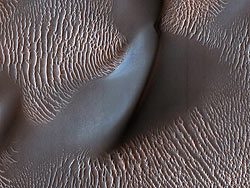 The above image shows the Proctor Crater on Mars. The bright, small ridges are sand ripples, and the larger, darker bedforms are sand dunes. We will get to see more interesting images in WWT later this year, as part of a joint Space Act Agreement.

Under the joint agreement, NASA's Ames Research Center in California will process and host more than 100 terabytes of data while WWT will incorporate the data and feature imagery from NASA's Mars Reconnaissance Orbiter (MRO) and NASA's Lunar Reconnaissance Orbiter (LRO). Ames Research Center is also developing a suite of planetary data processing tools that will convert historic and current space imagery data into a variety of formats and images of the moon, Mars and other planetary bodies.

Launched in August 2005, MRO has been examining Mars with a high-resolution camera and 5 other instruments since 2006 and has returned more data than all other Mars missions combined. Scheduled to launch this May, LRO will spend a year above the lunar surface collecting details about the lunar environment.

"NASA has a wealth of images and data, from the Apollo and Lunar Orbiter missions to Mars Reconnaissance Orbiter and the Mercury Messenger flybys. This collaboration makes it possible for NASA to leverage exciting new Microsoft technologies to make NASA's data and America's space program more accessible to the public", said NASA Ames Chief Information Officer Chris C. Kemp.

During MIX09 Microsoft announced the web-based version of WorldWide Telescope that enables seamless, guided explorations of the universe from within a web browser by using the power of Microsoft Silverlight 2.0. For more information, you can visit the WWT web site.