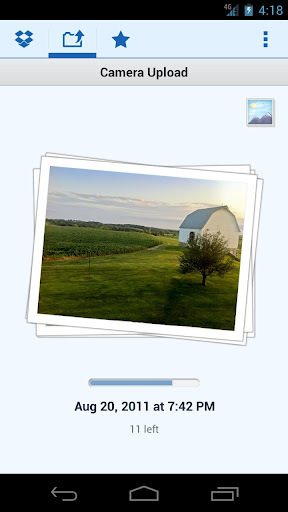 The Dropbox file sharing service has launched a new update this week for Android, Mac and PC users that should make storing photos and videos online much easier. The official Dropbox blog has the details, which reveals that the new Android version of the Dropbox app can now automatically upload all of an Android device's photos and videos to a single Dropbox folder. An iOS version with the same feature is due to be released "soon"

While the Google+ app for iOS has a similar feature called Instant Upload, it also restricts any photo you might want to upload if they are larger than 2048 pixels wide. Dropbox's new app keeps the original size and quality of any photo or video that is uploaded to a Dropbox folder. The pictures can also be viewed on the Dropbox.com web site.

The PC and Mac apps can also now upload any photo or videos that are found to a Dropbox folder when a smartphone, tablet, camera or even an SD card is connected to those PCs. The company is giving its users 500 MB of space for their first automatic photo/video upload. Users will have up to 3 GB of free storage space for their photos and videos with this new feature.