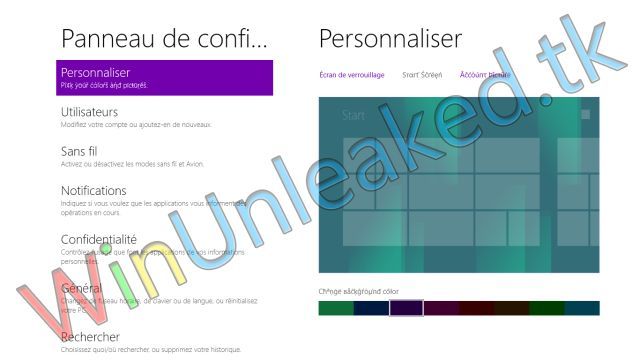 Microsoft's developer preview version of Windows 8 was released almost two months ago but that build of Microsoft's next major operating system lacks many major and minor features. Now a new screenshot posted at the WinUnleaked.tk web site from a more advanced but still pre-beta build of Windows 8 shows off a minor but still interesting new feature in the OS; a way to customize the look of the Start Screen.

As you can see in the above screenshot, the OS will have a way for users to change the background color of the Start Screen via an on-screen slider that provides a number of different color choices. The web site states that while you can change the color, the actual background image for the Start Screen will remain the same.

We will likely see screenshot leaks such as this one, and possibly full Windows 8 pre-beta leaks, pop up on the Internet in the coming weeks. Microsoft is expected to release a public beta version of Windows 8 around the time of the 2012 Consumer Electronics Show in early January.

With rumors that PC makers are prepping for a third quarter 2012 launch date for Windows 8, it looks like we are looking at Microsoft offering up its next OS less than a year from now. It's going to be interesting to see how the next 10 months or so shape up for both Microsoft and its plans for Windows 8.

Thanks to WinRumors for the heads-up