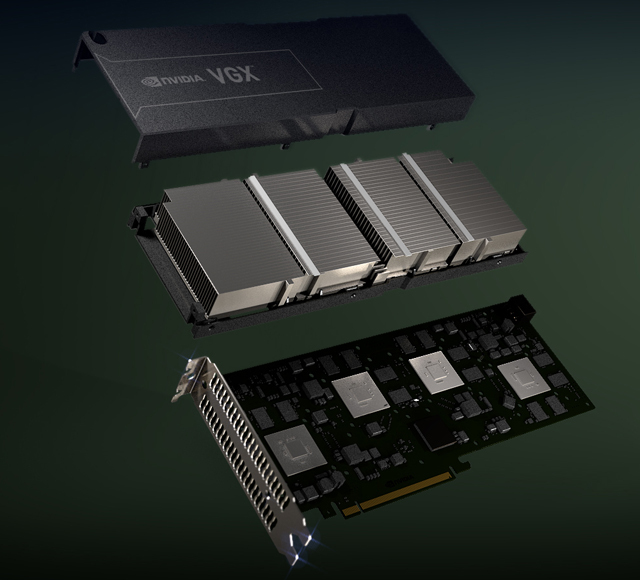 NVIDIA has decided to put its PC graphics technology in use for cloud-based graphics solutions. The company announced this week its plans to introduce what it is calling VGX. It basically takes NVIDIA GPUs, based on its recently launched Kepler design, and puts them into cloud servers that should allow users to have high end graphics and software experiences even on low end PCs and tablets.

According to the press release:

The NVIDIA VGX platform enables up to 100 users to be served from a single server powered by one VGX board, dramatically improving user density on a single server compared with traditional virtual desktop infrastructure (VDI) solutions. It sharply reduces such issues as latency, sluggish interaction and limited application support, all of which are associated with traditional VDI solutions.

The first NVIDIA VGX boards will have four GPUs along with 4 GB of frame buffer. Pricing and a release date will be revealed later this year.

NVIDIA has also announced a VGX related solution this week that will be of interest to PC gamers. It's called the GeForce GRID and NVIDIA says that streaming gaming services will be able to use the VGX technology to offer up high end PC games that can be streamed to work on low end machines. The press release states:

Featuring two Kepler architecture-based GPUs, each with its own encoder, the processors have 3,072 CUDA technology cores and 4.7 teraflops of 3D shader performance. This enables providers to render highly complex games in the cloud and encode them on the GPU, rather than the CPU, allowing their servers to simultaneously run more game streams. Server power-consumption per game stream is reduced to about one-half that of previous implementations, an important metric for data centers.

GeForce GRID already has a number of partners that will use the technology, including Gaikai.