Windows 10 build 10125, which just leaked, may not have a slew of new features but it does bring some interesting changes. Among these are the new icons, which we’ve already seen, and also a new version of Microsoft browser, Edge, also known as Project Spartan. 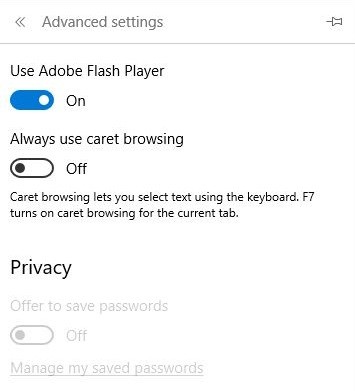 The new version of Edge, while still carrying its old codename, seems to be moving closer to a much more finished product. Its version number has jumped from 13.10122 to 15.10125; those of you who are keen-eyed will notice the second number represents the Windows build.

One of the new big additions in this version is the ability to playback full screen content, in an actual full screen window. Until now the browser did not have this feature fully implemented, meaning all content displays inside Spartan’s own window, making for a jarring experience on YouTube or Hulu.

On top of that there’s been a change in the Settings pane, which has now been split in two. The first page gives users access to the most frequently used toggles such as homepage address, history clearing and reading mode. The second page, dubbed “Advanced settings” holds all the other toggles. There’s also a new “Pin” available that keeps the Settings pane open while you’re navigating.

There are also some general performance improvements, but otherwise there don’t seem to be many other changes, not even under the hood as benchmarks scores have remained constant for a couple of versions now. Still, every step forward counts, and fixing the full screen issue is an important addition, making Edge much more likable in day to day usage.