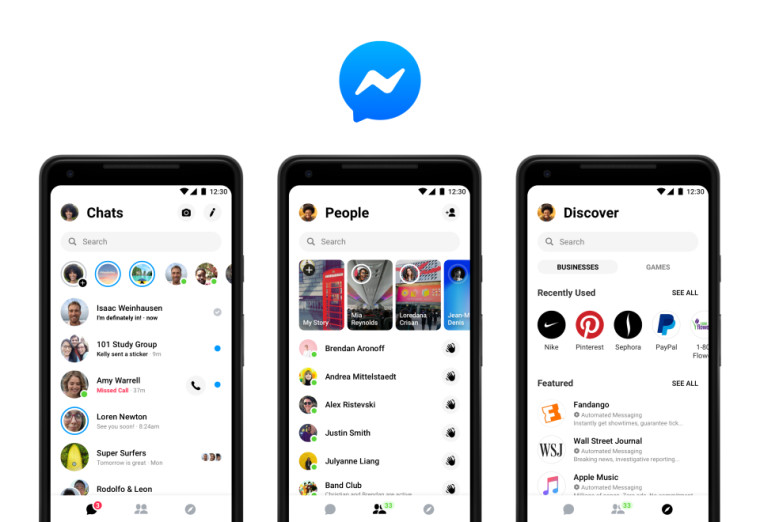 Facebook announced a major overhaul of Messenger during its annual F8 conference back in May 2018. The revamp was aimed at de-cluttering the app and making it more usable. The company itself admitted in early 2018 that while it had added a whole bunch of features over the years, the app had lost its simplicity. As promised, Messenger version 4 slowly began rolling out in October, bringing with it the much-awaited overhaul.

The limited rollout meant that it was not being pushed actively to many users. However, that might have changed recently, as it looks like the update is now rolling out globally. iOS and Android users alike have begun receiving the updated messaging app. The biggest highlight to the app is that it now features just three tabs at the bottom, labeled Chats, People and Discover, which is down from the nine options previously.

The Chats tab, as the name suggests, lists all your recent chats. It includes individual as well as group conversations, making it easy to navigate around without having to jump back and forth between those conversations. The People tab is where all the stories reside, along with the list of friends that are currently active. Stories are, however, also present in the Chats tab at the top of the screen, but are less prominent. Lastly, the Discover tab is home to the business pages as well as the games section, helping you find featured or popular businesses, or keeping a tab on the games that your friends are currently playing.

Other improvements include a refreshed UI that is clutter free, aplenty with white spaces, spaced out icons and clean fonts. The simplicity does not come at the cost of features, as the app retains all of the features from the earlier version. These features are hidden from view, such as within the four-dot icon within chats, or are placed intelligently to save them from cluttering the screen. There also are new personalization features, such as gradient chat bubbles. However, the much-awaited dark mode still isn’t in this update and will be coming soon.

Facebook has taken its time to increase the pace of the roll-out and push the update to users globally. Naturally, it’s possible for the update to take slightly longer to hit every device. Therefore, if you still haven’t received the update, it shouldn’t be long before it is served to your device.