As rioting in England has spread beyond London to many other cities, the role that social media has played in the situation has increasingly become a focus of discussion and debate across the nation. Twitter has been flooded with anxious citizens trying to find out the latest developments and, in some cases, to disseminate information about where the next attacks may occur. BlackBerry Messenger (BBM) has also been in the spotlight, as it has emerged that the messaging service has been perhaps the most significant tool used by the rioters to organize their movements and evade capture by police.

As you may have read here on Neowin yesterday, RIM has pledged to cooperate fully with British police investigations and is believed to already be actively engaged in sharing decrypted BBM messages to London’s Metropolitan Police service. RIM’s commitment to help the police “in any way we can” has not gone unnoticed by those involved in the rioting, however, with Digital Spy reporting that the company’s website was hacked, and defaced with a message from a group calling itself “TeaMp0isoN”.

The message demanded that RIM cease its cooperation with authorities, suggesting that innocent people may end up being wrongly implicated simply for being “at the wrong place at the wrong time and [who] owned a Blackberry”, adding claims that “the police are looking to arrest as many people as possible to save themselves from embarassment.”

However, the message then went on to threaten RIM employees, claiming that TeaMp0isoN has gained access to the company’s employee database, and would have no qualms about directing rioters to target employees homes:

Think about it…and don't think that the police will protect your employees, the police can't protect themselves let alone protect others…if you make the wrong choice your database will be made public, save yourself the embarrassment and make the right choice. Don't be a puppet.

We do not condone in innocent people being attacked in these riots nor do we condone in small businesses being looted, but we are all for the rioters that are engaging in attacks on the police and government…and before anyone says, ‘The Blackberry employees are innocent' No they are not! They are the ones that would be assisting the police."

The RIM website has since been restored, and the company has acknowledged the incident and confirmed that it is under investigation.

The scenes of public disorder in England have seen extensive violence and looting, with many leading technology stores having their stocks completely cleared out by looters. In one incident, a large Sony distribution center in north London was ransacked and then burnt to the ground. 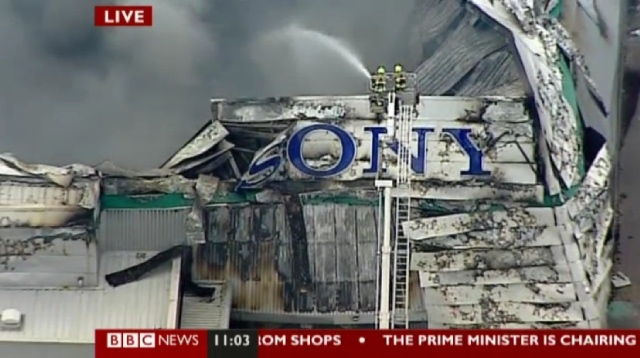