AMD announced its 2nd Gen AMD EPYC processors yesterday at a special event. The hardware comes with up to 64 Zen 2 cores built on the 7-nanometer (nm) process to deliver better performance. The processors are designed for enterprise, cloud, and high-performance computing (HPC) workloads and both Google and Twitter announced deployments of the technology. 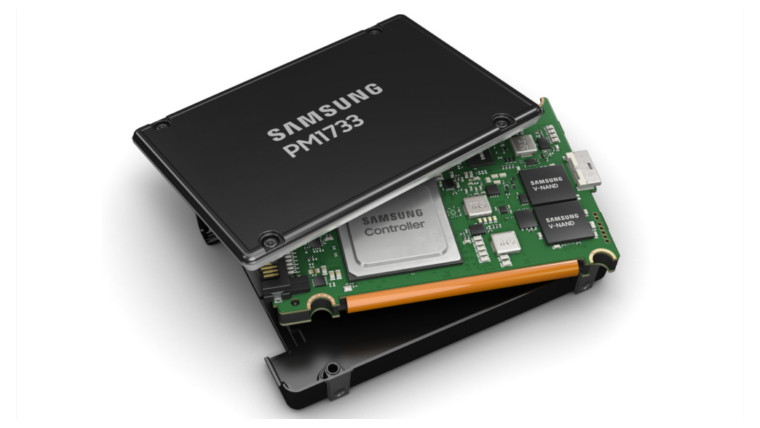 By using Samsung’s 4th Generation PM1733 SSD, deployments will have double the throughput capabilities compared to the 3rd Generation model. According to Samsung, it “reads sequentially at 8.0GB/s and randomly at 1500K IOPS”. It supports capacities up to 30.72TB for U.2 configurations, and 15.36TB for the HHHL configuration.

As for the RDIMM and LRDIMM DRAM, Samsung offers capacities ranging from 8GB to 256GB although each of the new CPUs can utilise as much as 4TB worth of Samsung’s memory.

“AMD has listened to the needs of its customers in developing the 2nd Gen AMD EPYC processors and has worked closely with us to integrate the best of our cutting-edge memory and storage products. With these new datacenter processors, AMD is providing customers with a processor that enables a new standard for the modern datacenter.”

“We’re excited and thankful to have partners like Samsung supporting the launch of our 2nd Gen AMD EPYC processors. With twice the cores, breakthrough performance and embedded security features, all optimized by leadership architecture, customers can now transform their datacenter operations at the pace of their business growth.”

Samsung will be making the PM1733 drive available across the industry this quarter in both the U.2 and HHHL variants, and it will be compatible with PCIe Gen 3 architectures.