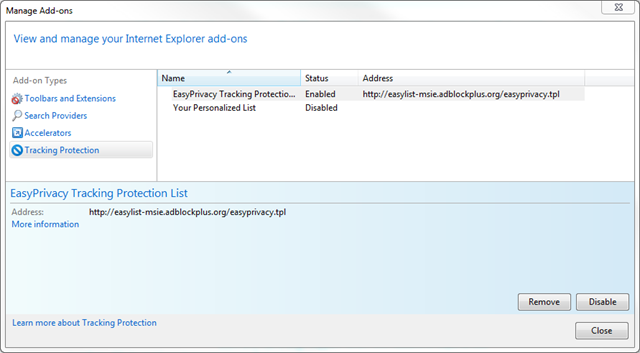 A day after the release of Internet Explorer 9 RTM, a study conducted by 'Which? Company' discovered that the anti-tracking feature in IE9 is flawed.

The anti-tracking feature works by blocking flash cookies, web beacons and images from tracking your browsing behaviour. When a user browses a website, these tracking cookies can record what websites you're browsing, including content and images. Microsoft included a feature to block these elements from attaching themselves while browsing, but the feature contains a flaw that could still allow tracking methods to be used.

Tracking Protection in IE9 allows you to quickly add a list that prevents these tracking elements, which are called TPL's. These lists contain a list of 'allowed' and 'blocked' elements, but this is where the flaw in IE9's tracking protection exists.

Which? Company found that the TRUSTe TPL is basically one big allow list, which still allows content from sites like Acxiom to capture some of your data while surfing. This flaw in Internet Explorer's tracking protection isn't a fault of Microsoft's, but of the authors of the TPLs.

Unfortunately, there isn't a method to manually go down the list and toggle any of the websites to allow or disable them from tracking. Which? has already contacted Microsoft about the possible flaw. Corporate vice president of IE Dean Hachamovitch said,

‘To your premise, ‘deny' does equal block, or ‘protect' from potentially bad things. ‘Allow' is also essential in order to express relationships such as ‘this content but not that, or none of these except for those'.

It's unlikely that Microsoft will go back and revise their tracking protection strategy, but the hope is that they include an option for users to manually toggle lists, as it could be a handy feature in the future.