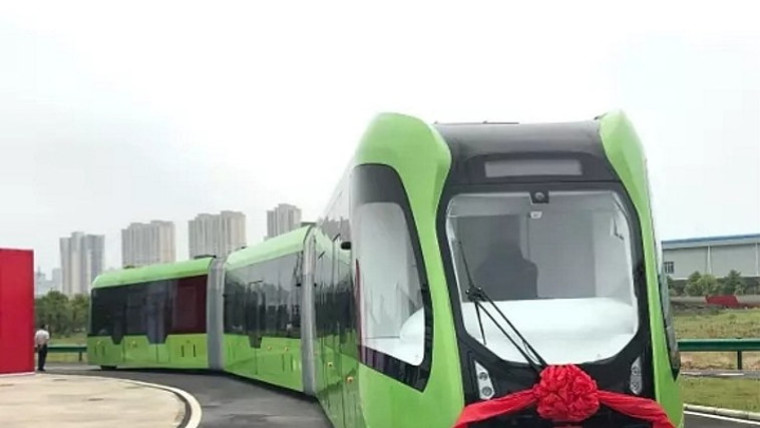 A Chinese rail company, CRRC, has showed off its latest mass transit system in Zhuzhou, Hunan province, its called the ART (Autonomous Rail Rapid Transit) or perhaps the “smart bus”.

With all the talk about, for instance: a flying car for the Olympics in Japan, and driverless car proposals coming out of our ears, we sometimes forget about the application of automation and electrification to other vehicles.

The ART appears to be a driverless, electric train that runs on a virtual track on conventional roads. So you might say it’s sort of like a bus combined with a train and a tram? The company has set a display loop up, where they show the train following white lines, which are its "tracks", painted onto a normal road.

As much as this is still in its display and test stages, with 6.5km of ART “track” planned on a route in Zhuzhou for 2018, in the video there is clearly a man with a steering wheel sat at the front, perhaps this is while legislation or testing is passed.

Nonetheless, the company declares that the system will be excellent for some of China’s inner cities who might not have the budget for the very expensive normal rail and tram systems. It allegedly costs around $102 million to lay a kilometer of subway track, whereas the ART boasts at only costing $2 million per kilometer.

The ART can carry around 300 passengers and is about 30 meters long, however carriages can be added and taken as seen fit. According to their video, the ART can travel at a speed of 70 km/h, and travel 25 km after only 10 minutes of charging.

On the inside, the ART is one continuous carriage space, as opposed to separate carriages, very much like the new London underground trains. It will be interesting to see if this smart hybrid alternative forms part of public transport systems outside of China.