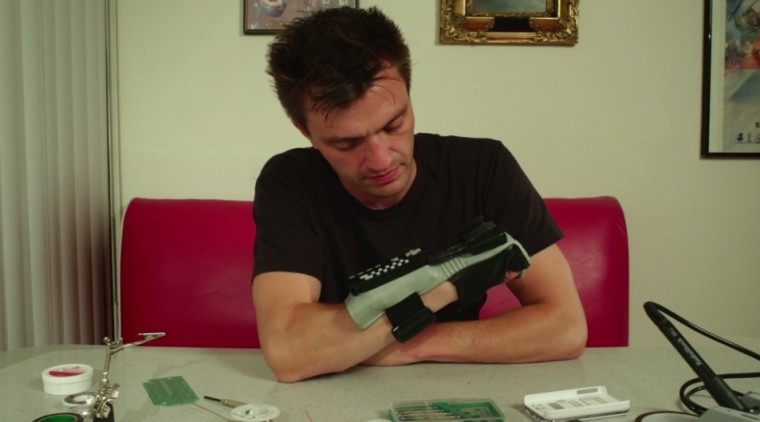 Above is animator Dillon Markey and he uses the 'Power Glove' to create stop-motion animation for Robot Chicken and PES.

If you aren't familiar with the Power Glove, it was a wearable controller accessory created for the Nintendo Entertainment System. Although it was never officially released by Nintendo, it was an officially licensed product and it worked terribly. Markey has adapted this controller for use in his daily work as a stop-motion animator.

Naturally, Markey has modified the device adding Bluetooth and a circuit board so that he can control his camera. The directional pad has been modified to allow Markey to move forward and back between frames, he also has a dedicated play button, and most importantly he has two buttons that he uses to shoot images in either one or two frame increments.

Although he doesn't go in-depth, he does state that the number pad on the glove can be also be programmed to perform custom actions. Lastly, he has a set of tweezers on the side of the glove that he uses to change characters emotions by changing their eyes, mouth, and eyebrows. While the Power Glove might not have been the most useful Nintendo accessory in its time, it's good that Markey has found a new purpose for this nostalgic piece of gaming history.