Live video streams have become a very popular source of content on the internet over the past few years, thanks in no small part to the likes of Twitch, Amazon's live streaming service. But a new report from StreamElements in partnership with StreamHatchet indicates that the online retailer's platform is losing some ground to YouTube, which has been growing in the live video market.

As seen in the graph below, Twitch saw significant growth over the course of 2018, but took a hit in September, with users watching about 813 million hours of content on the service over the course of the month. In that same month, YouTube live streams grew significantly, despite still being far behind Amazon's platform at 226 million hours watched. Regardless, that's around 25% of the total streaming times during that time, up from 15% back in March. Coincidentally, Google relocated its gaming-related features to the main YouTube website last month, which may have caused its popularity to rise. In comparison to the two major players, Microsoft's recently acquired Mixer goes nearly unnoticed - under 14 million hours were watched on the platform in September. 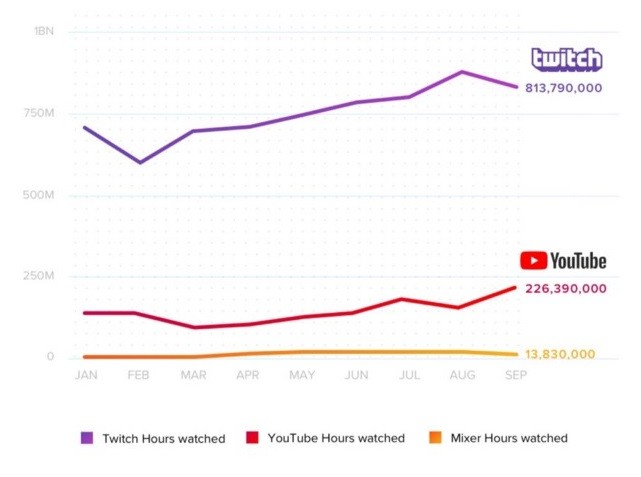 Another interesting tidbit from this report is the fall of Fortnite. The wildly popular battle royale game may finally be losing its grip on the live streaming community, having seen major drops in viewership in both August and September. Last month, it was down to 105 million hours watched on Twitch after peaking at 151 million in July. Thanks to this drop, Epic Games, the publisher of the title, also lost its place as the most popular gaming company on the platform, with Activision/Blizzard retaking the lead for the first time since February.

But while gaming is the most popular source of live video content, StreamElements also points out that other genres are on the rise, at least on Amazon's platform. The category previously referred to as IRL (in real life) has consistently grown for the first three quarters of 2018, which may be related to the fact that this category has been split into a number of less vague genres, such as 'Food and Drink', 'Music', and others. Lastly, the report points out that, despite their high-profile status, e-sports events only account for 9 to 17% of all the steaming hours watched on Twitch throughout 2018.