A US Air Force research team has built a supercomputer using just over 2,000 PlayStation 3 game consoles, according to military news site Stars and Stripes. Dubbed the 500 TeraFLOPS Heterogeneous Cluster it is almost 100,000 times faster than existing high-end processors.

Using off-the-shelf components, including the metal shelves containing the cluster, and running Linux, the system will be used for purposes such as high definition video image processing and Neuromorphic computing, which mimics the human nervous system.

Dr. Richard Linderman, the senior scientist for Advanced Computing Architectures, said that the main reason for choosing the console for their supercomputer was it's low price-to-performance ratio. "Supercomputers used to be unique with unique processors," he said. "By taking advantage of a growing market, the gaming market, we are bringing the price performance to just $2 to $3 per gigaFLOPS."

He added that power consumption was also a factor, with the completed system using between 300 to 320 kilowatts at full power. Most supercomputers require 5 megawatts.

However, Mark Barnell, the high performance computing director at the laboratory, added that this does not make the PlayStation 3 "the Holy Grail of supercomputers." As the way the consoles connect with each other is relatively slow compared to regular supercomputers, the system is limited as to what kinds of programs it can run.

The research group, which was awarded a $2 million dollar grant for the cluster, has yet to take full advantage of the system's performance. Upon completion, the team expects it to be capable of 500 teraFLOPS. 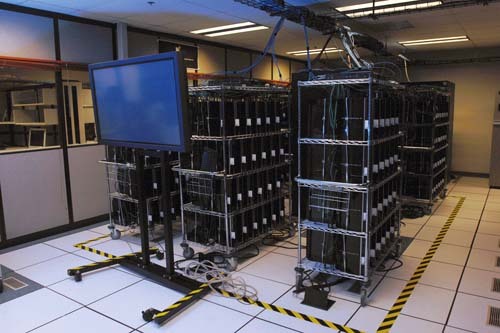