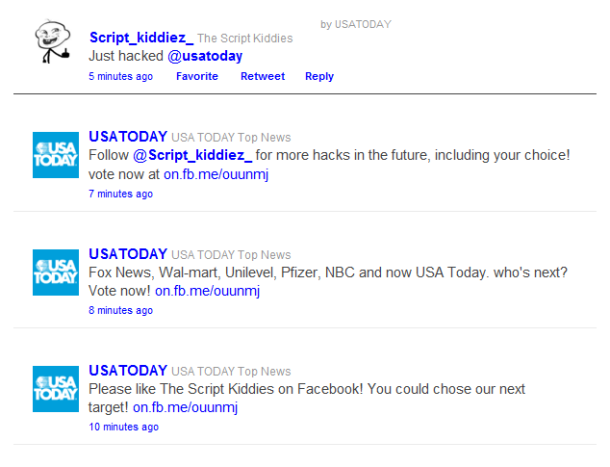 The group behind a rather deplorable Twitter hack on NBC News' profile earlier this month has done the same for the Twitter profile of USA Today, the national newspaper published by Gannett. News.com reports that the group known as the The Script Kiddies took control of the USA Today Twitter profile briefly on Sunday and used it to post messages against Twitter as well as asking readers to vote on which Twitter page they should hack into next. USA Today's Twitter profile has since been restored and the site posted a message that apologized "for any inconvenience or confusion caused to our readers."

The messages posted by the Script Kiddies group this weekend were mild in comparison to what they posted up on NBC News' Twitter profile earlier this month. The group used the profile to post false news reports about a terrorist attack in New York City at the Ground Zero location of the September 11, 2001 attacks. There's still no word as to the motivations of this new hacker group.

Twitter may become a bigger target for hacker attacks if it doesn't do more to improve its security measures. News.com quotes Graham Cluley of security firm Sophos as saying, "I, for one, would like to see Twitter and other social media sites offer an additional level of authentication for those who want to better defend their accounts. I fear that, unless that happens, we will continue to see high-profile accounts hacked and brands damaged as hackers run rings around them."