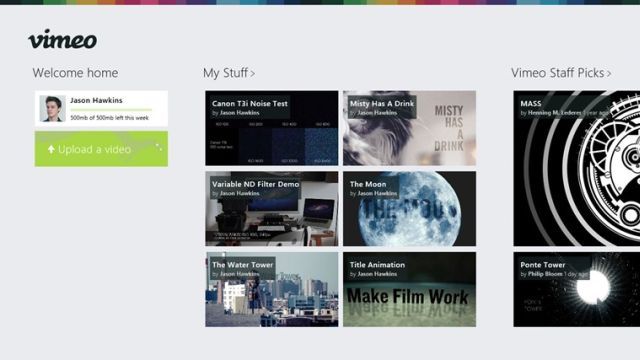 The Windows Store inside Windows 8 keeps adding more apps from major providers. Over the weekend, we noted that the official Windows 8 app for The Weather Channel had quietly been launched. Today, yet another Windows 8 app from a well known company has made its debut.

The app is for the Vimeo video streaming service, which competes with DailyMotion and YouTube in offering a way for people and businesses to upload videos for anyone to watch. The Windows 8 app description states:

Upload and watch your videos on Vimeo, browse our expertly curated featured channels, watch user videos, share video links to other apps, and even project content to any connected external devices via our PlayTo integration.

In fact, there are three Vimeo apps available in the Windows Store. Each has a label for a different PC maker: HP, Samsung and Dell. However, all of them are available to the general public and seem to be the same app with slightly different labels.

Vimeo launched in 2004 and now has over eight million registered users and 65 million unique users. It launched a major redesign of its website in January which allowed for larger videos and other new features.