Despite the news that consumers are unlikely to get their hands on it until next year, there’s an incredible amount of buzz and excitement already building around Google Glass, the company’s Android-powered wearable device. With the first reviews emerging from those who were lucky enough to get hold of Glass before the rest of us mere mortals, the details and nuances of how the device works are now being revealed, giving the world a glimpse of what’s to come.

One of the spicier details to emerge in these revelations – besides the slightly disturbing photo (below) that Robert Scoble tweeted of himself in the shower last week – is that Glass won’t let you swear. 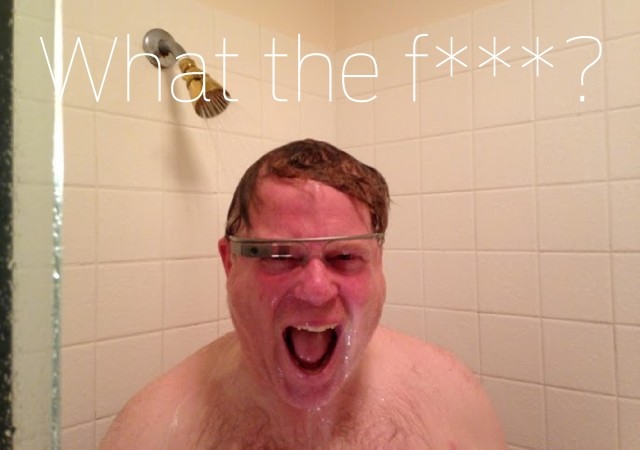 Given the nature of the device, there’s obviously no keyboard, so the only method of text input is via Google’s voice-to-text translation. It’s the same technology used on Android devices, although on phones and tablets, you’re at least afforded the alternative option of being able to enter your text manually.

But just as with other Android devices, the voice-to-text interpretation automatically censors your text, as Geek.com notes. Drop an F-bomb and it will appear as f***; try to send a naughty text to someone, and all those terrible things that you said you’d do to them with the rubber chicken and the pineapple will be mercilessly edited in a s***storm of asterisks.

Of course, most voice-to-text interpretation services perform a similar function – but in most situations, the presence of a keyboard enables you to manually edit the text so that it reads as you intended. Given the absence of that alternative on Glass, you might think that Google would offer adjustable settings to allow you to express yourself with all the filth and smut that your dirty, rotten mind can come up with – but alas, Google offers no such controls.

Of course, this may change as we get closer to the device's release. But maybe this censorship is a good thing - it could be all the incentive you’ll need to clean up that potty mouth of yours.