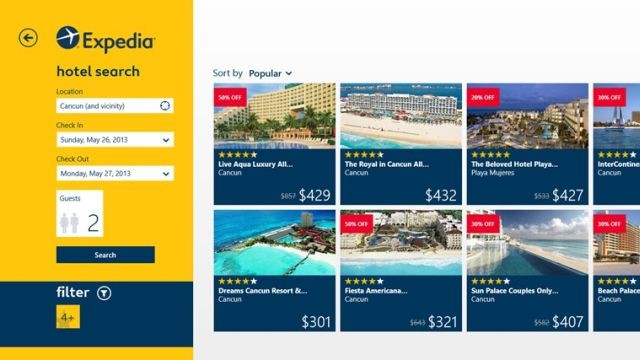 As we get closer to the holiday period when Microsoft has admitted there will be a slowdown in publishing new Windows 8 apps, more and more apps are appearing in the store. At the same time, we have also seen some new updates to previously released popular apps.

The new official Windows 8 Expedia app has made its first appearance in the Windows Store this week. This first version allows users to find and book hotel rooms from the popular online travel service along with reviews of said hotels and more. The Windows 8 app also has what Expedia calls "Expedia Mobile Exclusive" deals for tablet users. This first version does not include support for booking airline flights or car rentals, so it's a bit disappointing on that front.

The Google Search app for Windows 8 has also been updated this week. New features include allowing the user to view search results in their default web browser as well as the ability to print from the app. There have also been some voice search and performance improvements and some unnamed bug fixes in this update.

Finally, the Netflix app for Windows 8 has received a new update. Unfortunately, Netflix's update page only shows that it has "added features and fixed bugs" in this new version, with no other details revealed.