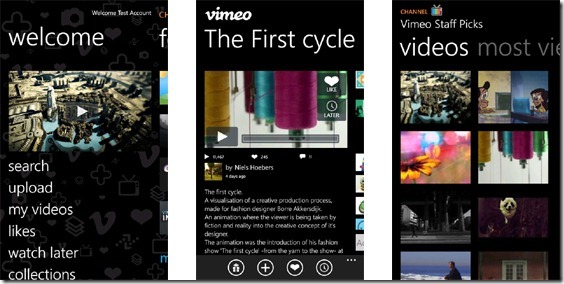 Microsoft's Windows Phone Marketplace is gaining more and more major apps that have previously been made available for iOS and Android users. While we are still awaiting when Microsoft will add the Skype app for Windows Phone users, another popular mobile app has now made an appearance in the Marketplace.

The Vimeo streaming video service now has a free application for Windows Phone owners. The app allows Windows Phone users to upload new videos directly from their device to their Vimeo accounts. There's also ways to pause and resume uploads or even replace previous ones with new videos. You can also monitor how many times your Vimeo videos have been seen by others and how many "likes" and comments the videos receive.

If you just want to watch Vimeo videos, the Windows Phone app enables you to like and comment on the existing videos on the service. It also allows people to put some videos in a queue to be watched later. You can share videos on your Facebook and Twitter accounts or via email and text messages. You can also add videos to your Windows Phone groups, channels and albums.

Hopefully, a rapid rise in the number of apps in the Windows Phone Marketplace combined with its expansion into more countries will result in even more high profile apps coming to Windows Phone users.