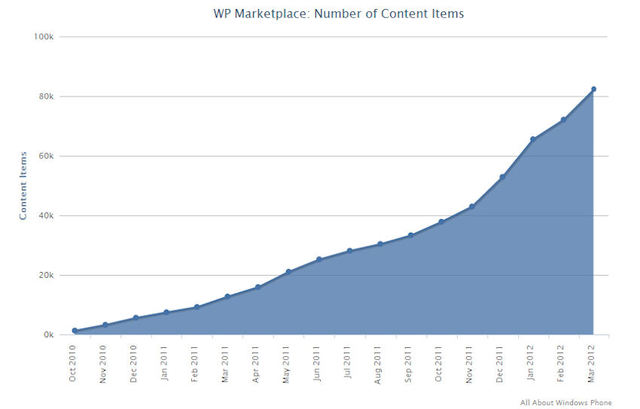 The Windows Phone Marketplace was a late bloomer in the app store story but that doesn’t mean that it is lacking in applications. According to AllAboutWindowsPhone.com, the Marketplace has surpassed 80,000 published apps and is adding new applications at a rate of 340 apps per day.

The current landscape consists of 20.3K publishers and a little over 29K apps were added in Q1 of 2012. It should be noted that 80K apps is the number of applications that have been published and may not represent the total number of apps available to all users. This is because 9500 apps have been removed from the Marketplace by Microsoft or have been withdrawn by the publisher.

Additionally, some apps are region defined which means that depending on your location, you may be restricted from accessing some applications. 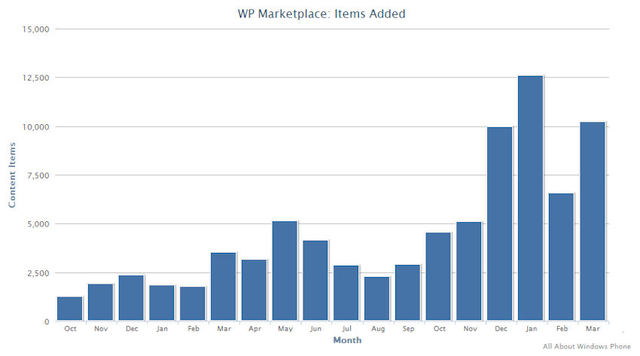 The application submission rate has been on the rise with the current rate being 340 apps per day which is an increase over February’s submission rate of 250 per day; although it is down slightly from January. Also, the current marketplace consists of 67% of the apps being free, 10% being paid but have a free trial and 22% being paid only.

While it is great to see that the Windows Phone Marketplace is filling out its clothing, there are still notable applications such as Mint, Draw Something, Scrabble, Pandora, LinkedIn, Flipboard and the list goes on that are still absent from the store.

With the launch of the Lumia 900 only a couple days away, Microsoft and Nokia are hoping for a major boost to the user base to help expand the marketshare Windows Phone commands. With a greater marketshare, developers will be keen to create applications in parallel with iOS and Android to help create parity for their users across all mobile ecosystems.

Image Credit: All About Windows Phone