Just 8 months after the platform’s launch, Windows Phone 7 has hit the 25,000 app milestone – and it doesn’t appear to be slowing down at all. WindowsPhoneApplist is currently sporting 25,018 applications in its Marketplace tracker, and is reporting 1,947 new applications just in the last two weeks with 6,979 approved developers. 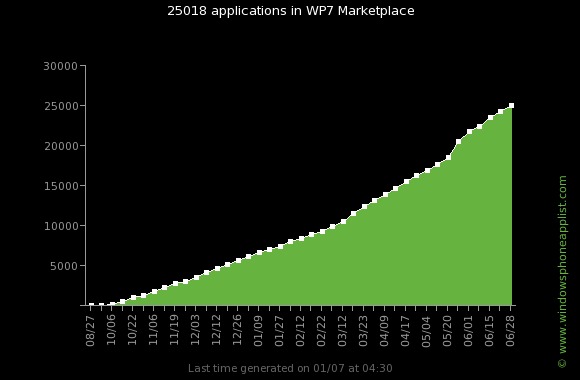 This is great news for the Windows Phone 7 community, as Marketplace milestones such as this one seem to be coming quite frequently: in April the Marketplace surpassed 15,000 applications and before that in March we saw 12,000 applications. This means that in just two months, the WP7 Marketplace has grown by 10,000 applications, and as WP7applist reports (whose app count is just under 25,000), 262 apps were added to the Marketplace in the last 24 hours with 186 apps getting updated each day on average.

While this number may seem small, we can compare it to other platforms to see just how well the WP7 Marketplace is performing. It took Apple’s App Store the very same 8 months to hit the 25,000 app mark, after which it exponentially increased at around 10,000 apps per month. On the other hand, it took the Android Market over a year to reach the 25,000 app milestone. Currently the App Store and Android Market have over 525,000 and 400,000 apps respectively (including inactive apps).

The Windows Phone Marketplace is definitely growing, so it won’t be too long until we’ll be seeing WP7 hit the 50K, and then 100K apps milestones.