Popular video ripping service YouTube-mp3.org has agreed to close its doors as part of an agreement with the Recording Industry Association of America (RIAA), which sued the website on behalf of major record labels late last year. 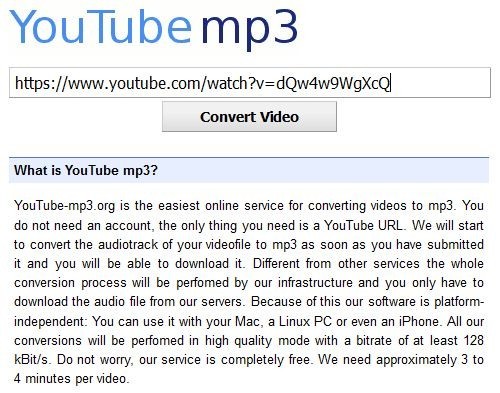 YouTube-mp3 markets itself as "the easiest online service for converting videos to mp3." It allows visitors to simply paste a link onto the website, instantly transforming a YouTube video to a music file. This is a convenient service for those who want to instantly get a song on their devices and take them offline wherever they go. The service currently ranks #335 on Alexa, which shows how popular the website is with internet users.

According to the lawsuit, with the 60 million unique monthly users of the ripping website, "tens, or even hundreds, of millions of tracks are illegally copied and distributed each month." The complaint further alleged that the service committed copyright infringement through every converted media, while the people running the website have continued to profit from it.

Almost a year later, according to a report by TorrentFreak, YouTube-mp3.org and RIAA have agreed on a settlement. In a proposed final judgment, both RIAA and YouTube-mp3 have asked the court to rule in favor of the record labels. The service's operator, Philip Matesanz will also have to make a settlement payment, though the amount has not been disclosed.

Furthermore, the official document shows that the defendants are now restricted in operating the YouTube-mp3.org website, which will be now handed over to one of the record labels. It is also enjoined from developing, designing, offering, or operating any technology or service that promotes "streamripping," and infringing any copyrights owned by the petitioners.

The proposed judgment still lacks a signature from the concerned court. As of this writing, YouTube-mp3.org is still up and running, but with the agreement in consideration, the website is likely to go dark in the near future.